An Excerpt from The Deepest Cut 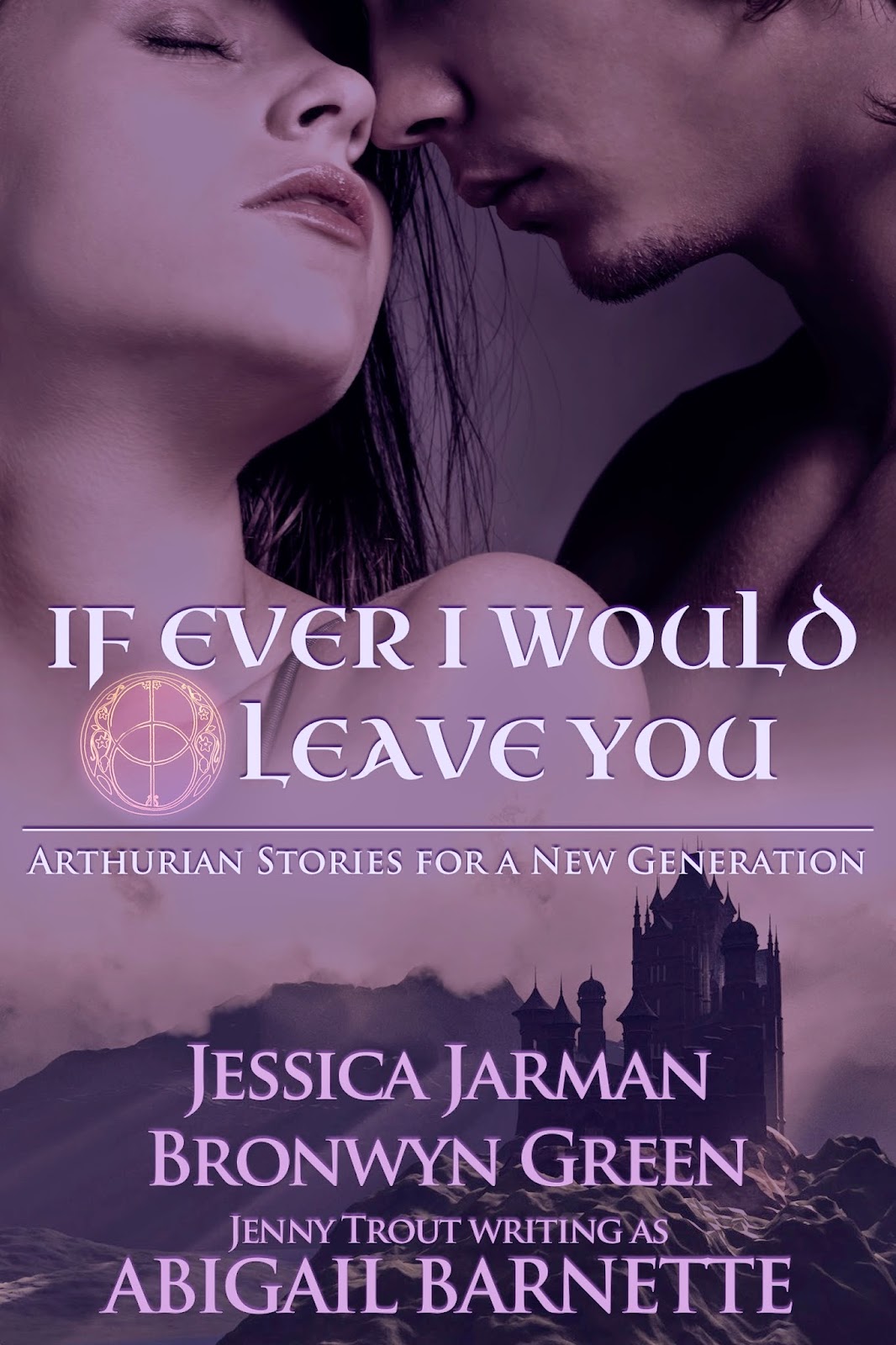 "The Deepest Cut" is my story in If Ever Ever I Would Leave You. It's the first in my series Albion's Circle.

And you should totally check out excepts from the other stories in the collection.  "A Choice Fit For a Queen" by Abagail Barnette and "Surfacing" by Bronwyn Green.

Here is the blurb:

For nineteen years, Anna has been plagued by dreams of lives lived only in legend. Finally free from the family that believed her hopeless and worthless, she’s ready to start her life over—alone. When Anna meets an enigmatic stranger claiming to be the legendary wizard Merlin, she is forced to question the very reality she’s struggled to accept. With the mythic figures from her dreams intruding on her waking life, Anna learns that she’s been reborn to fight an ancient evil alongside King Arthur and his Knights of the Round Table. Caught in an ages old conflict, Anna is the key to stopping a dark magic that will destroy the world—and Merlin wants to make sure that this time, Anna isn’t alone.

Fire raced along every inch of my body, just under the skin. Sadly, it wasn’t a new feeling. And, after last night, I’d expected it. What I hadn’t expected was the shakiness and almost constant nausea plaguing me all damned day. It hadn’t been this bad in... I didn’t actually remember it ever being this bad. Not like this.

Usually, I could keep it controlled. If I kept busy and focused on what I needed to do through the day, I was fine. It had always been the nights that gave me problems, but I’d found ways to deal with that, too.

I gripped the counter in front of me as my vision blurred. Shutting my eyes, I tried to concentrate on my breathing. In and out. In and out. I bit back a whimper as faces flashed through my mind. One more than the others. No, no, no. I couldn’t deal with him in my head, not now. I bit my lip hard, focused on the pain. Not ever.

A weight settled on my shoulder, and I opened my eyes.

I forced my lips to curve into a smile. Henry, the only other employee in the small
café today, looked concerned.

“You’re pale as hell,” he murmured, running his hand down my back. “It’s dead in
here; why don’t you take a break?”

I glanced down at my watch. It was just after seven. “There’s less than an hour ‘til
close,” I protested. “I’m fine.”

Of course my body decided that was the perfect time to show just how fine I wasn’t.
A tremor worked its way from my head to feet, and I had to cover my mouth as the late lunch I’d forced myself to eat threatened to reappear. My eyes stung as they filled with tears.

Henry shook his head. “Nope. Go take a break, and get some water in you. Take your time. If I need you, I’ll holler.” When I hesitated, he used his hand on the small of
my back and pushed me toward the door marked “Employees Only”.

I managed to walk through the tiny kitchen to the break room. Hands trembling, I
grabbed my purse from my locker and stumbled to the restroom. It took three tries to turn the lock, and with a sob, I leaned against the heavy door. Clutching my bag to my chest, I slid down until my ass hit the cold floor.

I don’t know how long I sat there, shaking, trying to pull myself together. And failing miserably. Behind my closed lids, images flipped rapidly, almost too fast to distinguish one from another. Almost. But they were as familiar to me as my own reflection. I knew each and every one. Not just faces this time—though, they were there —but places, buildings, events all clouded my mind, tried to burrow in and refused to be shoved aside. It was fierce and brutal, as if these imaginings were fighting back for all times I’d tried to bury them or cut them out of my life.

It didn’t make sense. I shook my head and moaned as the movement sent a wave of pain through my body. God, why was this happening to me? Why was it getting worse? I knew what my mother would say. I’d stopped taking all the medications she and her army of doctors shoved at me my entire life. Well, I’d stopped years ago, so that wasn’t the reason. And those medications... I’d rather be dead than take them again. I felt dead when I was under their influence. That was the reason I’d stopped. I wanted to feel, to live, and they made that impossible. So, as soon as I’d left home, I threw out the pills and never looked back. Things had gotten bad then, but I learned how to deal with it and function normally—without killing everything that made me me.

At first, on my own, I did a lot of stupid things. Stupid, stupid things. All I wanted to do was feel—so I partied hard, drank more than my fair share, and took just about every drug I came across. Not my finest moments. I got over that real quick. Waking up every morning in a different bed with a different person, with no idea what I’d done... Not how I wanted to go through life.

After a time, I realized some sleeping pills to help me get a solid night’s sleep—a solid, dreamless night’s sleep—was all I really needed.

I fumbled with the zipper on my purse and started digging through the contents. My fingers closed around a bottle, and I looked at it resting in my palm. That was the
problem. The pills weren’t working. Fucking Nate. I threw the unlabeled bottle back into the bag as anger joined the constant pain.

Nate was who I got the sleeping pills from. It was easier than trying to get a doctor to prescribe them—they always wanted to talk about why I wasn’t sleeping, and the hell if I was going there with anyone—and cheaper than paying for office visits and all that shit.
My breathing hitched as I felt solid steel at the bottom of my bag. I pulled out the pocketknife with trembling fingers.

The pills I’d gotten from Nate the other night were bad. They had to be. Because the alternative—that I was as crazy as my mother thought I was—couldn’t be. Could it? I wasn’t crazy. I pulled the blade of the knife open and fought against the bile surging up my throat.

I wasn’t crazy. Hitching up my skirt, I stared at my thighs, and the pale thin marks I kept hidden from the world. My vision blurred until I couldn’t see clearly, and I was biting back sob after sob. I couldn’t let Henry hear me. I needed to get control, so I could deal with Nate and his fucking shit-batch of pills.

I wasn’t crazy. I pressed the blade against my inner thigh. I still couldn’t see, but that was okay. I knew just how hard to push, how to drag the sharp tool slowly along my skin. My lids fluttered shut, and my breathing evened out as I felt the initial prick then the soothing sting.

I wasn’t crazy. I just needed to focus. And this...this brought me focus. This made things clear. I opened my eyes and watched crimson well up in thin lines, getting thicker and thicker until it began sliding down, down, down. A few beads dripped onto the floor, and in that moment, everything quieted inside me.

Five. It’d only taken five stripes to come back together again this time. Steadily, I rose to my feet and walked to the sink. I cleaned the knife, dried it and put it back in my purse. Avoiding the mirror—I knew I looked like shit, I didn’t need to see it—I lifted a booted foot to rest on the bar beside the toilet. As I cleaned my leg, blood soaked into the rough paper towels, and the drag against the cuts calmed me further. They wouldn’t stop bleeding so I pulled some Band-Aids from my bag and covered them, with hands that no longer shook.

When I had both legs beneath me again, I splashed cool water on my face and took a
few deep breaths.


And you should totally check out excepts from the other stories in the collection.
"A Choice Fit For a Queen" by Abagail Barnette
"Surfacing" by Bronwyn Green.

Labels: A Choice Fit for A Queen, Abagail Barnette, Bronwyn Green, Excerpts, If Ever I Would Leave You, Jenny Trout, Surfacing, The Deepest Cut