MERLIN CLUB: The Lady of the Lake

MERLIN CLUB: THE LADY OF THE LAKE
Or Another One Where Colin Morgan Breaks My Heart

RECAP—It was a dark and stormy night…in Camelot. A bounty hunter, Halig, comes into town with a girl in a cage. 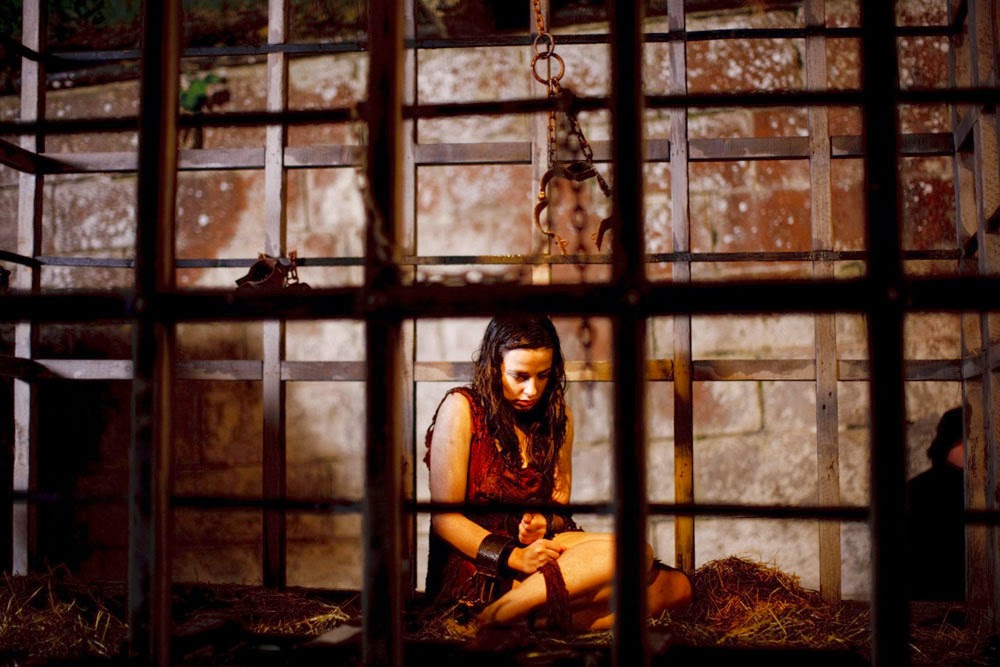 Gaius and Merlin are walking home from treating a patient and see her. Gauis tells Merlin that Uther pays a reward to those who capture magic users, and warns Merlin not to interfere.

But our young warlock doesn’t heed this warning, of course, and comes back later to free the girl. As they are escaping, Halig notices she is gone, but Merlin uses magic to knock the bounty hunter down by dropping the tavern sign on his head, but the blow doesn’t knock him out. Halig sees two figures running away.

Merlin leads the girl to the caves beneath the city and promises to take care of her. She wants to know why he helped her. He says it could have easily been him in that cage. He tells her his name and learns hers—Freya.

Halig goes to Uther and tells him of the girls’ escape. Gaius is surprised when the bounty hunter says the druids fear her and cast her out—it goes against what he knows of the druids and their desire to help those in need. Uther orders her found, along with the accomplice Halig mentions seeing. A search begins.

In the morning, Merlin steals some food from Arthur’s breakfast

(and the series’ continuing joke about Arthur getting fat begins) and brings it to Freya. They share some moments and grow closer (omg, if i was in a dark cave with freaking Colin Morgan, we’d be sharing more than moments…oh, sorry, back to the recap).  So the next day, Merlin steals more food from Arthur, but on his way to Freya, Merlin is taken by Halig. The bounty hunter questions Merlin and doesn’t believe Merlin’s claims of not knowing anything. Arthur comes on before Halig can rough Merlin up, and says that his manservant has his complete trust. Gaius also questions Merlin about his involvement in the girl’s escape but Merlin denies everything.

That night, at midnight, two lovers are attacked and killed. When examining the bodies the next day, Gaius finds the evidence conflicting—the wounds were clearly made by an animal, but there are human footprints leading away from the bodies. Uther says it must be a magical creature.

Merlin is spending more time with Freya, and there is sweet, sweet romance in the air.

He decides that he’s going to get her out of Camelot, and he’s going to stay with her. She protests but is clearly pleased with the suggestion. Merlin goes to Morgana’s chambers to steal a dress for Freya, and is caught by Gwen, using some BS story about moth holes to make a quick getaway. He runs into Arthur on his way, and the prince clearly thinks Merlin’s cross dressing.

The next time midnight rolls around, two guards are killed and the same evidence is found along with an eye witness account of a gigantic cat with wings. Gaius does his research thing and goes to Merlin with his findings. He say that Freya is cursed—every night at midnight she becomes a Bastet and must kill. 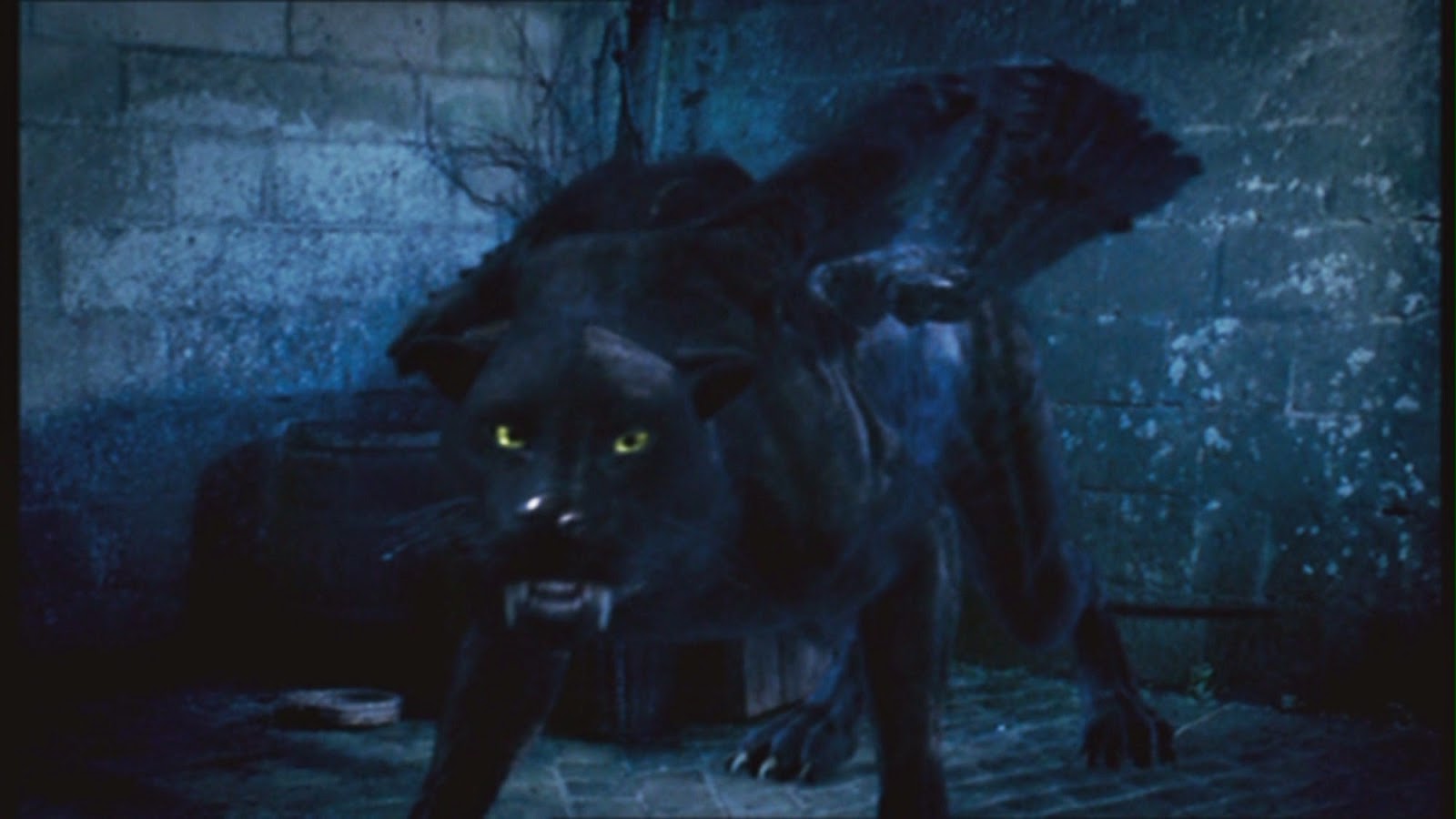 She has no control over it. Merlin confesses that he helped Freya but doesn’t believe what Gaius is telling him. The bells begin to toll and Merlin runs out of their chambers.

Freya, who was trying to escape Camelot, is cornered by Halig, Arthur and a group of knights. Unfortunately, it’s midnight so Freya transforms and tears Halig apart before attacking Arthur and his men. The prince manages to wound the Bastet and it makes its way into the courtyards. Merlin comes running onto the scene, and it seems like the beast recognizes him. Merlin uses magic to make a gargoyle fall, distracting the men long enough for the Bastet to escape. Merlin runs after her into the caves. Even in Bastet form, Freya allows Merlin to pet her before she retreats farther into the cave. He finds her back in human form, clearly dying from the wounds. She tells him her story—she was cursed by a sorceress after accidentally killing the sorceress’s son in self-defense.

Merlin takes Freya to a lake. She says she is grateful to him for making her feel loved. She thanks him and vows someday to repay him. He places her body on a boat and using magic, sends it out on the water and sets it ablaze.

This kills me. Every time. Damn you, Colin Morgan, for doing what you do so well.

When he returns to Camelot. Gaius consoles him. Later, Arthur finds him doing his chores. He knows Merlin’s been upset and asks about it. And there's this sweet Merthur moment to end the episode.

If I’d written this episode, I would have changed… Bron brought this up while we were watching… How could Halig NOT know Freya transformed into the Bastet. She said she was in the cage for several days/nights. She transforms at midnight. WTF? He seems so shocked when she transforms, and that just doesn’t make sense. So I’d have her not be in the cage that long or have a reasonable explanation for him not knowing.

Thing(s) I loved about this episode—Motherfreaking Colin Morgan. Dear GOD, I cry every time I see this episode. EVERY. SINGLE. TIME. Because of HIM!! Last episode, I said Bradley James knocked it out of the park with his Angry Arthur. Well, Colin killed it in this episode. His connection with Freya… When he says Gaius doesn’t understand what it’s like to be a monster and fearing what you are… (and we know he’s not just talking Freya here) His devastation at losing Freay… *sigh* Brilliantly done.

Thing(s) I hated about this episode—Uther seemed out of character. It was weird. A magical girl is on the loose and he’s so casual and laid back about it. It doesn’t fit his usual overly zealous attitude about catching sorcerers. Not that I like Uther that way, but him NOT being that way was just odd and made me uneasy. LOL

Something I never noticed about this episode before— This is the first time we’ve seen a gargoyle around the castle since Sigan made them all fly and stuff. Now, I really have to go back to early episodes to see if they’re ever shown. I suspect, there are only gargoyles when it is needed for the plot.

Favorite costume—Oh this episode…. I got to see Merlin sans neckerchief, by fire/candlelight AND soaking wet. It was lovely. Add this—my favorite “costume” courtesy of Arthur—and seriously I was in HEAVEN.

Here is proof of some random head canon I’ve created— When Halig is questioning Merlin, Arthur shows up awfully quickly. Especially since Merlin just left him eating breakfast. It’s like he knew Merlin was in danger (and needed his man. ROWR). More proof of the connection they have? Not much, but it’s all I have this episode.

What would Bron steal from Camelot in this episode?

I TOTALLY meant the tub, not hot Bradley James in a towel... ;-) Maybe.

What made Jen lose her shit (in a good or bad way) in this episode? That Merlin was willing to do all of this for Freya—a stranger—but continues to lie to and doesn’t help Morgana, his friend.

Until the next episode—Sweet Dreams—which we’ll be watching, 6/16, at 8pm EST. We’ll be on Twitter with the hashtag #MerlinClub
Posted by Jess Jarman at 8:00 AM