MERLIN CLUB: The Once and Future Queen

MERLIN CLUB: THE ONCE AND FUTURE QUEEN
Or the One Where Merlin Loses His Shit and Looks Adorable Doing So

RECAP - So we open with King Odin— cheery fellow :-/  —hiring an assassin, Myror, to kill Prince Arthur. Apparently Arthur killed Odin’s son in a duel and the king is holding a grudge. Myror heads off to Camelot.
In Camelot, Arthur is practicing for a jousting tournament (Yes, another tournament in Camelot! We get to see Uther's fabulous tournament clap! Woot!) and realizes he’s being treated differently and the knights are going easy on him because he’s a prince. And we see SIR LEON…FINALLY!
After talking with Merlin and thinking really hard, Arthur comes up with a plan to participate in the tournament without anyone knowing who he is.

The plan is to hire someone to act as “Sir William of Daira” when the knights ride out and greet the crowd. Then he will return to the tent and Arthur will exit with his helmet on. No one the wiser that it’s Arthur and not the man they saw before. The prince will reveal himself after the final, after he wins of course.

So, at dinner with Uther (yes, there is a shit ton of food on the table. Heaven forbid Uther go hungry. Screw the starving children in Camelot; the king needs to eat!), Arthur feeds his father some line about a beast being seen roaming a nearby wood. He says the creature has the body of a lion, the wings of an eagle, and the face of a bear. Merlin’s very amused by this. Clearly, Arthur says, this beast has been conjured by magic. Uther agrees and therefore it must be destroyed, though he does pout a bit when he points out Arthur will miss the tournament. But obviously, destroying something of sorcery ranks higher than one of Camelot’s many tournaments.

The next morning, Arthur leaves the castle with a hunting party, but they go ahead under orders from Arthur that they tell no one he has returned to Camelot. Merlin meets him and gives him some clothes to wear. Arthur goes to Gwen’s house, where he’ll be staying for the duration of the tournament. There, the prince, Merlin and Gwen work to transform this poor peasant, a farmer from one of the outlying villages, into a believable knight. 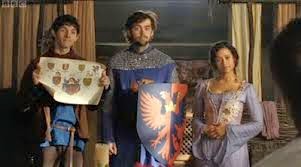 Uther is warned that Odin has hired someone to kill Arthur. Uther sends people to find Myror. But the assassin is waiting for the hunting party but sees Arthur is missing so he heads on into Camelot to find him.

After the first day of the tournament, Gaius is giving Merlin grief about not finishing his chores and whatnot. He doesn't know, of course, that Arthur is still around. Poor Merlin is being run ragged. After working all night, Merlin falls asleep on the wet floor he was scrubbing. Gauis makes some snarky comment about Merlin laying around doing nothing. And then comes my favorite scene of the whole episode. Merlin loses his shit, my friends. I apologize for all the images, but I had to include it in it's entirety, because it's just freaking gold.

Gaius does apologize to Merlin later and all is well.

At Gwen’s house, Arthur is pretty much an ass. He takes her bed, not even wondering where she’s going to sleep (which turns out to be sacks of something. Not sure what, but it looked freaking uncomfortable), has her running to the well late at night and heating water for him so he can wash, and other stuff. She finally blows up at him, saying he talks about wanting to be treated like everyone else, not given special consideration because he’s the Prince, but he’s rude and selfish and clearly wants special treatment when it suits him. Her rant isn't as lovely as Merlin's but it's quite awesome.

Arthur says he wants to make it up to her by cooking her dinner. In the end – after being perplexed by a raw chicken –

he sends Merlin to the castle kitchens to get dinner. While the prince and Gwen are eating, Myror is spying on them. He tracked Arthur there, mostly because it was a bit suspicious that the prince’s manservant was helping some random knight in the tournament and Myror followed Merlin and figured it all out. Myror is ready to kill Arthur but is distracted and nearly caught by guards coming through the town.

Gwen realizes that Arthur didn’t make dinner after recognizing the plates from the castle. And she is PISSED that he lied, saying she thought he’d learned some humility. Arthur apologizes and tells her he cares about her. Merlin then rushes in, having found out there is an assassin after Arthur. They agree Arthur will continue to stay at Gwen's since no one knows he's there.

The next day, while Gwen is helping Arthur get ready for the tournament. She gives him a handkerchief, telling him it’s “for luck”. He kisses her before he leaves.
Myror kills Arthur’s opponent and takes his place As he and Arthur charge towards each other, Myror triggers a hidden blad to slide out of the end of his lance. He manages to injure Arthur. Merlin has seen the blade and sneaking around, see Myror in armor and the dead man on the ground inside a tent.

Arthur, meanwhile, refuses to forfeit because of his injuries. Before Merlin can get back and warn him, Arthur is back on his horse ready to joust again. Merlin manages to break the strap on Myror’s saddle before the assassin can injure Arthur more or kill him. The fall kills Myror (lucky, that, yeah?) and Arthur wins the tournament.

Back in his tent, Arthur tells the farmer posing as “Sir William” to go out and accept the win, saying “Perhaps this is a time for humility.” Gwen looks super happy with Arthur.

Arthur tells his father that the assassin attached him while he was hunting the mythical beast, and that was how he was injured. Uther wants Odin to pay, is ready to go to war with the other king, but Arthur convinces Uther towards peace, that it was grief for his son that pushed Odin so far. Arthur and Gwen exchange a meaningful stare across the room,

but later, he tells herhis father would never understand, would never allow anything between them, with her being a servant and all. Gwen assures him that he doesn’t have to explain, and that maybe when he’s king, things will be different.

If I’d written this episode, I would have changed… Okay, I get this is the episode where it becomes clear that Arthur and Gwen are this great epic love story. Well, it didn't work or me. Not. One. Bit. And it's NOT because I am all about Merthur. I swear. I actually appreciate the pairing of Arthur and Gwen. What I don't appreciate is the way they did it.

The entire episode, Gwen is pissed at Arthur and his behavior. Even though there have been moments in past episodes when it seemed she was a bit interested in him, right now, she literally can't stand him. She only helped him out because Merlin convinced her to. Then, because he smiles at her and says he cares, she's giving him her handkerchief as a favor and sucking face with him. I could even accept that, because damn, he's hot. Despite being an ass. But then when he says his father would never approve and all that, she's all "When you're king, maybe things will be different." It's a strong implication that she's going to wait for him. I have big problems with this. Big ones.

One, Uther's fairly young and healthy, so it could be a long ass wait for someone you couldn't stand a day ago.

Two, how can her feelings be that strong in so short a time? I don't get it. But it's Arthur and Guinevere and their epic freaking love, so we are supposed to just accept it, I guess.

So what would I change? Show that her feelings are beginning to change, that she's seeing a different side of him. And then continue to develop it positively over the next episodes. Instead of rushed and unbelievable (In my opinion).

The thing(s) I loved about his episode – Merlin losing his shit. Best. Ever. Seriously, love it. 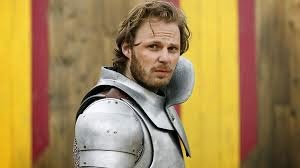 This is the first episode he appears in and it's a beautiful thing. :D It just makes me so happy.

And lastly, when Merlin's cleaning out Gaius' leech tank at the end (apparntly his punishment for lying to Gauis), his reaction to leeches on him is exactly how I am when anything creepy touches me. It delights me to watch.

The thing(s) I hated about this episode – Arthur being such an ass. My GOD. It was like all progress we've seen in him to this point has disappeared. Even when he's apologetic to Gwen and trying to make things up to her, he's being a total dick to Merlin and acting like he used to. I think it's ridiculous. I know why they did it. They wanted viewers to go "Awwww look how much Gwen changed him. That's how much he loves her; he changed into a better man for her, blah blah blah." And it pisses me off. Because he HAS grown as a character and they basically erased all that growth in a blink. RAGEY.

It's like the writers were like, let's make Arthur act like a dick again so we can show what a wonderful influence Gwen is on him and how he changes for her. Epic. Love. Story. Right?Let's throw away a seaon's worth of character development because...

This is the story we're telling now. It was totally Gwen's influence that changed Arthur. That's the story now, people, don't question it.

I didn't enjoy that it was a magic light episode, but that's fairly minor. Even Uther in this episode didn't make me rage or pull out the Ryan Stiles .gif. Go, Uther. I know it won't last.

Something In ever noticed about this episode before – So when Arthur leaves with the hunting party then sends them on their way, I guess I never really or thought about it before - there's a handful of people out there that know there was no magical creature. Arthur must freaking trust them because if any of them mentioned to Uther that they just went camping for a couple days... I dunno, just seemed odd to me.

And I don't think it's coincidence this dress popped up when we started seen Gwen as a real love interest for Arthur. Purple is the color of royalty after all.

Here is proof of some random head canon I’ve created – Don't really have anything this episode for this one.

What would Bron steal from Camelot in this episode? Ignore the prince fondling the poultry and look behind him. Bron would love that cabinet, I'm fairly certain. 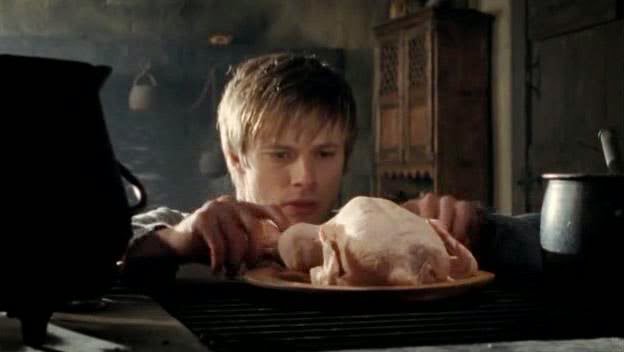 What made Jen lose her shit (in a good or bad way) in this episode? The fact that Arthur, Merlin and Gwen do exactly what Lancelot did - fake a seal of nobility - and get away with it. Perhaps it was because Lancelot was trying to be a knight, but c'mon, Uther is such a stickler about the rules of nobility and the knights's code etc, would he allow a fake noblemen win a tournament? Why wasn't he having good old Geoffrey of Monmouth look into his seal??

Also, the good kind of losing it, Uther's tournament clap. :)

Until the next episode – The Nightmare Begins – which we’ll be watching Monday, 5/5, at 8pm EST. We’ll be on Twitter with the hashtag #MerlinClub