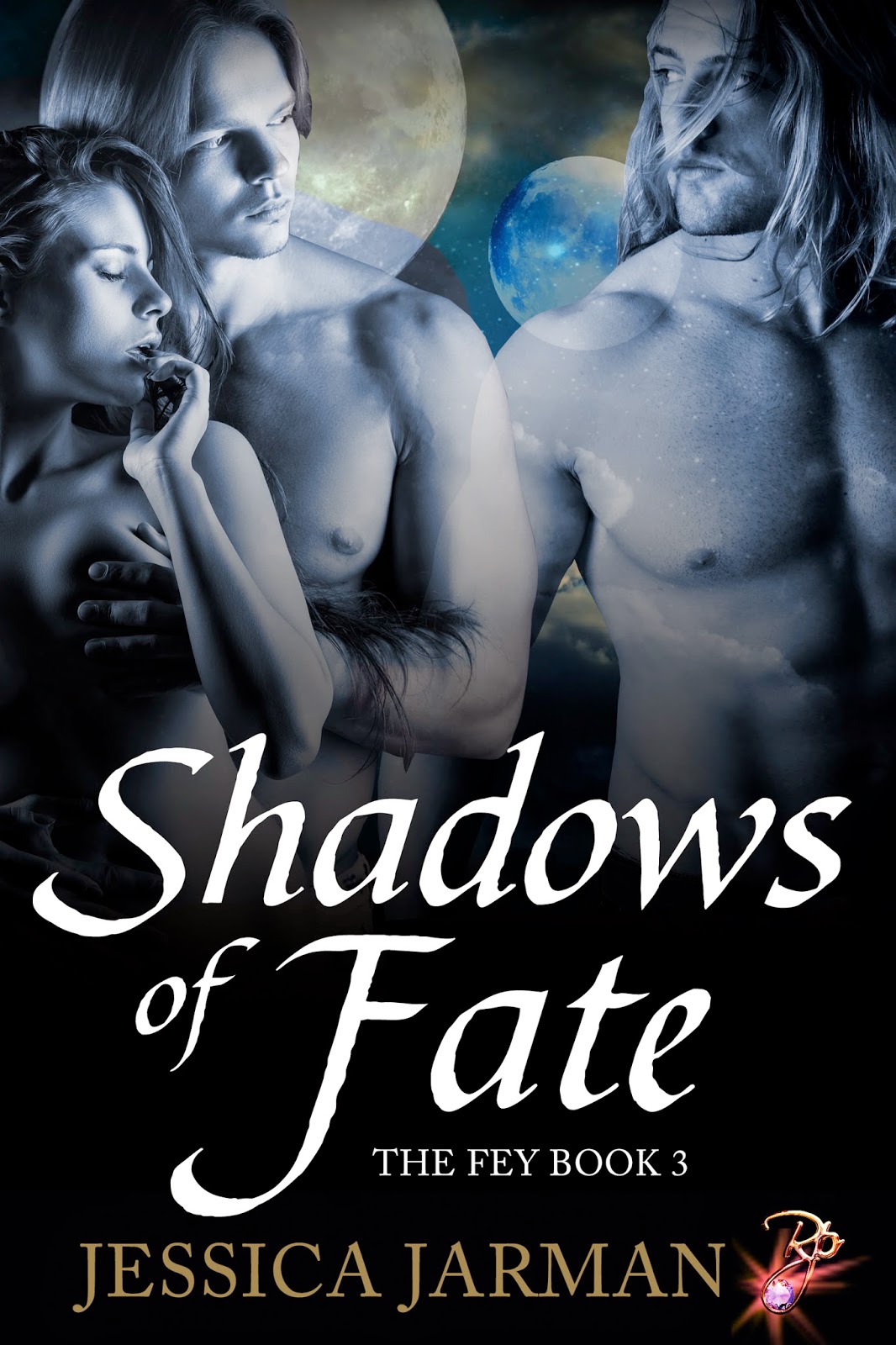 Finding one’s true mate is rare. Finding two true mates is nothing but a dream…or is it?

Ciarra, Guardian of the Dark Realm, fantasizes of forever with two men but knows how unlikely that is to happen. Those around her are more than happy to point out how foolish such dreams are, and she vows to be content with her life as it is.

She loves her home, her family, and her lover, Finley, but when Leilen of Fey comes to the Dark Realm on behalf of the King, he reawakens all her dreams and desires.

Can she really have it all? Happily ever after with both Finley and Leilen? Or will her dream be banished once and for all?

Keep reading for a sexy except...

Ciarra walked through the shadows of the forest, running her hand along the rough bark of trees, over shrubs that tickled her palm. Everything was still, silent, around her. She stopped, closed her eyes and inhaled deeply, enjoying the sweet scent of galama blossoms. She sighed happily and started moving again.

Suddenly, hands gripped her arms, and she was spun around until her back was against the solid trunk of a tree. And a body, a very male body, pressed against her front. Her heart raced. Not from fear, but from excitement as the man lowered his head to suck on the sensitive skin of her neck. Her stomach clenched as pleasure zipped through her body, centering between her legs. She tried to move, but he slid his hands down her arms and held her wrists tightly. Another wave of excitement and anticipation rolled through Ciarra.

Yes, yes, yes. Closing her eyes, she tilted her head back. She was rewarded with a sharp nip of teeth on her flesh followed by the heated glide of his tongue over the small hurt. A shudder racked her body, and moisture flooded her pussy.

By the Blessed Lady, she wanted more. A cry welled up in her throat as he pushed a hard thigh between hers and her clit pressed against his taut muscles. She rocked her hips, and the cry escaped. A desperate sound ringing through the trees. Pleasure swirled through her, blissfully hot and tight.

He released her wrists and shifted his hold to her hips, stilling her movements. Frustration bubbled up, and she seized the moment to reach for the laces at the front of his trousers. Her fingers fumbled in her haste to free his cock. Her pussy clenched at the thought of him inside her, stretching her, filling her.

Just as she was about to slide her fingers into the tight confines, he lifted her. Startled, she braced her hands on his shoulders. He held her close and turned, lowering until she lay on her back in the lush grass. Kneeling beside her, he slid his hand from her hip, over her belly and down. When he cupped her heat, Ciarra lifted into the touch and ground against his palm.

He bent forward and captured her mouth in a brutal kiss. She parted instantly for him, welcoming his slick tongue inside. He pressed hard circles against her clit and, with his other hand, lowered the straps of her gown until he could push the bodice beneath her breasts. Ciarra grumbled slightly as the thin strips of fabric held her arms at her sides but was only rewarded with a low chuckle.

Ciarra gasped as wet heat surrounded her pert nipple, followed by a stinging bite. Desire arrowed down between her thighs, and she circled her hips, adding more pressure against his hand.

He released her breast, stretched out beside her and grasped her around the waist. In a fluid motion, he rolled onto his back and pulled her atop him. Ciarra freed her arms from the constricting straps and straddled him, the skirt of the gown riding up her thighs. Her heat nestled against his hard length. She pulled away, wanting to see his face, but the shadows hid him. She opened her mouth to say something, question him, but the words didn’t come. Shock replaced the curiosity she’d felt.

Hands rested on her shoulders, fingers caressing the bare skin. Her mind whirled—the man beneath her had his hands on her hips. She turned her head, but all she could see were more shadows. But she felt another body behind, the warmth from it seeping into her skin.

The hands on her shoulders slid down her arms, fingers tantalizing and tickling. The man beneath her pulled up on her skirt until it was bunched around her waist. Ciarra gasped as the cool night air teased her bare ass. A low, gravelly hum of approval sounded behind her—definitely another man. To be taken by two men… Her excitement escalated. The fact she couldn’t see their faces didn’t cause fear, rather it heightened everything. Her heart thundered, her breathing quickened as both sets of hands caressed her.

She jolted as a kiss was pressed just above the curve of her ass. The man behind her grasped her cheeks and spread them, opening her. Could he see her, or was she as hidden from him as they were to her?

She reached down to free the cock beneath her. She sighed happily when she wrapped her hand around it. Hard and smooth, it pulsed against her palm. She raised herself up on her knees then slowly filled her pussy with the steely length. It stretched her inner walls, and her muscles clenched uncontrollably as a hot, sleek glide of tongue teased her rear entrance then speared inside.

Ciarra moved up and down on the cock filling her—once, twice—before her movements were halted by a tight grip on her hips, whose grip she couldn’t tell. She wiggled slightly and was answered with a gentle bite on her ass. A thick finger circled her anus then dipped inside, filling her further. Her eyes slid closed, and she wondered how it’d feel to take both cocks at once. The fullness now was overwhelming…and oh so delicious.

They held her still as the finger in her ass pumped in and out, then another was added, stretching her. The cock inside her jerked as the pressure increased. Ciarra made a sound of protest when the fingers eased out of her, but immediately, a cock teased her tender opening. Ciarra tried to push back against it, take it inside, but the hands on her hips held fast.

Goddess, she couldn’t take much more of this. She wanted both of them inside her, possessing her with abandon. She squeezed her eyes shut and soaked in the sensations bombarding her body. Even the slight wind on her sweat-dampened skin tantalized her more than she’d dreamt possible.

Suddenly, the body behind her was gone. Had he pulled away? She opened her eyes and twisted around but saw nothing. The hands on her hips squeezed tightly then she was alone. Kneeling in the grass, excitement slicking the insides of her thighs, she was alone.
Posted by Jess Jarman at 6:00 AM