MERLIN CLUB: THE CURSE OF CORNELIUS SIGAN
Or the One Jess Wrote While Under the Influence of Vicodin and Therefore Has No Clue If She Is Making Any Sense, But Really, Really, REALLY Hopes She Is For Everyone's Sakes.

RECAP – A tomb is discovered below Camelot. I’m not exactly sure how…was Uther expanding the dungeons? Creating another massive cavern to imprison a magical creature? Not sure, but in any case, a tomb was unearthed. The noise from the excavation is keeping poor Prince Arthur from his beauty rest. He calls for Merlin – who is there awfully quickly. Aren’t his and Gauis’ chambers like all the way across the castle? What is he doing hanging around in the middle of the night? (Oh the possibilities…) Arthur orders Merlin to go down and do something about the noise. When Merlin gets down there, it’s wild panic all around. Turns out one of the works was kills by a booby trap in the tomb. 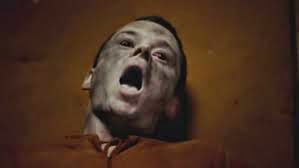 A bit later Gaius, Uther, and Arthur have joined Merlin down below and Uther is practically foaming at the mouth at the new found treasure. A strange glowing heart shaped jewel is set in the sarcophagus’s lid. 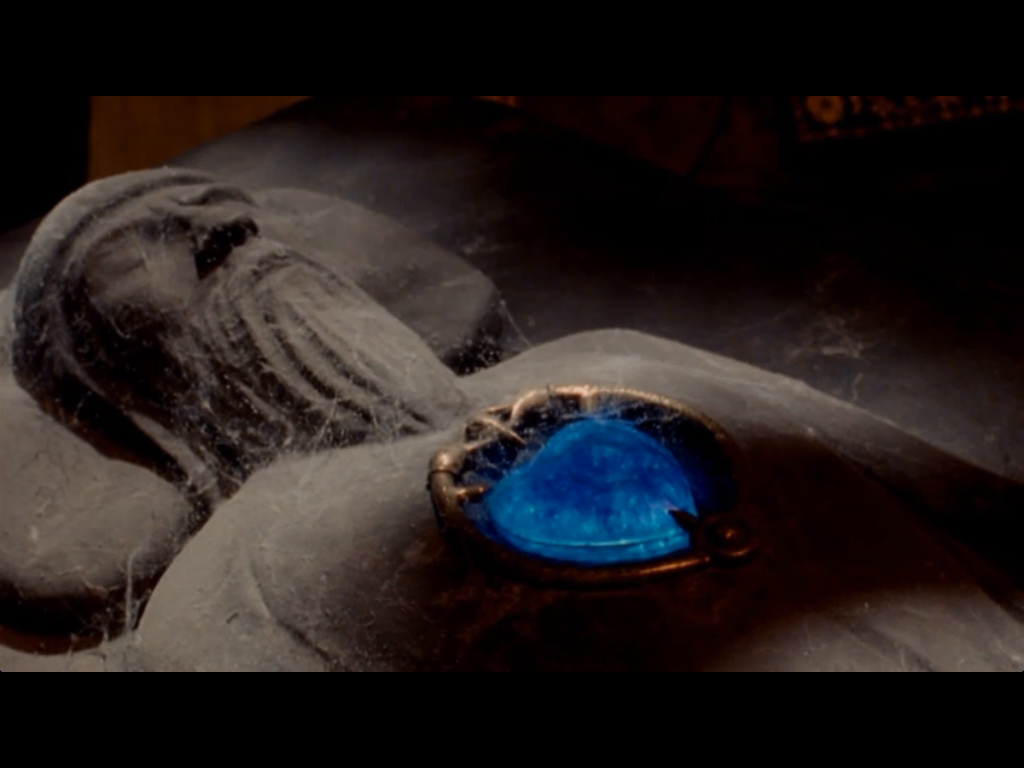 It’s clearly magical. I don’t understand why no one sees this.

Meanwhile, a thief named Cedric has learned of the treasure and plots how to get into the castle to gain access to the tomb.

The following morning, Arthur and Merlin prepare to leave for a hunt and Arthur ends up falling off his horse. Cedric races over and helps. He flatters and fawns over Arthur, who eats it up.

Cedric is then invited along on the hunt, which annoys Merlin.

During the hunt, a wild boar changes them, heading straight toward Arthur. Merlin uses magic on a spear and kills the animal, but Cedric takes credit for it. And Merlin can’t speak up for fear of losing his head. Arthur is grateful and offers Cedric whatever he wants for saving his life. Cedric asks for apposition in the royal household.

Merlin is quite put out, having saved Arthur’s life again with no recognition. Things worsen when Cedric undermines Merlin at every turn, but it all comes to a head when Cedric drugs Merlin so he falls asleep while mucking out the stables. While Merlin is unconscious, Cedric lets all the horses out. Merlin, covered in dung (not a good look, poor bubby), wakes to an angry and exasperated Arthur. They argue, and Cedric interjects that Merlin is clearly exhausted and needs a night off, that he is more than happy to fill in for Merlin. Despite Merlin’s protests. Arthur tells him to take the evening and think about whether he wants to remain Arthur’s servant.

Encyclopedia Gaius had discovered the tomb belongs to Cornelius Sigan – an evil sorcerer who vowed to destroy Camelot upon his death. He found a way to make himself immortal, storying his soul in the jewel. His soul will possess anyone who removes the jewel from its setting.

Yet again, Uther is a douchecanoe. Gaius warns him but he blows it off as usual.
The next night, Morgana wakes with a nightmare about a raven – and the raven is an emblem of Sigan. Instead of being honest with Morgana, Gaius, naturally, decides she needs to have a stronger sleeping draught. Yes, drugging her harder is definitely the answer.

Cedric, uses his new position and steals Arthur’s keys and enters the tomb. He is orgasmic as he surveys all the riches and freaking motorboats a handful of jewels. Awkward. He, of course, is mesmerized by the glowing jewel and removes it. Sigan’s soulis released and takes Cedric’s body.

When the tomb’s theft is realized, Gaius and Merlin realize the soul-jewel was removed. Merlin realizes the only person who would have access to the keys, besides the prince himself, is Cedric. He goes to let Arthur know.

Arthur doesn’t believe him (shocker) and when things get heated tells Cedric to escort Merlin from the castle. Then it’s fight time, folks.

It is beautiful to watch. In the end, though, Merlin is thrown in the cells.

SIgan/Cedric casts a spell that animates the gargoyles around the castle, and they proceed to attack Camelot’s residents. 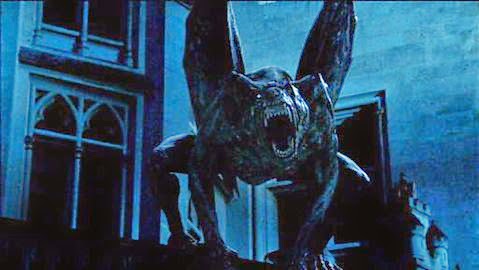 Arthur and his knights fight them, and many knights die. Gaius, Gwen and Morgana treat the wounded, and Merlin magically breaks out of his cell.

As Arthur faces off against the creatures, Gwen ends up saving his life then brings him in to treat his wounds. Arthur tells Gwen she’s bery brave and thanks her. Merlin, all sneaky like since he’s supposed to be in the dungeon, talks to Gaius. The older man tells him that only the Great Dragon can help them figure out how to stop Sigan. Merlin is shocked that Gaius new the whole time that he was seeing the dragon, and is opposed to going to see Kilgarrah. Remember he vowed never to do so again after the whole business with his mama? But he eventually caves and is willing to do it …for Arthur.

There’s dragon snark and Kilgarrah agrees to share a powerful spell that will defeat Sigan, but only if Merlin vows to release him one day. Merlin reluctantly agrees, and the dragon breaths on him – and he knows the spell now. 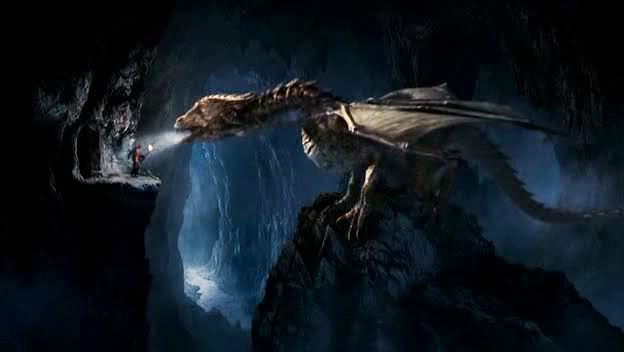 Uther wants to lock down the citadel to protect those inside, but Arthur refuses and gathers his men to go back out into the fray. He’s all about his duty to Camelot right now. It’s lovely. He gets cornered by one of the animated gargoyles and orders his men to retreat and faces the creature on his own. He’s knocked out, but before it can kill him, Merlin is there and destroys it with magic.

As Merlin is checking on the prince, Sigan/Cedric arrives. He tries to entice Merlin to his side. He is confused by Merlin’s refusal, saying Arthur treats him like a slave and threw him to the side with little thought. Merlin says it’s better to serve a good man than to rule with an evil one. Sigan/Cedric says that if Merlin won’t join him, he will possess his body, and therefore his magic. Sigan’s soul leaves Cedrics body and as it’s entering Merlin, Merlin speaks a spell. It traps the soul into the jewel once more. Camelot is safe. Hurrah.

What Uther takes away from this experience is he needs to be more vigilant about eradicating magic. He feels he’s been too complacent.

Arthur comes to Merlin and it’s clear Merlin has his job back as the prince dumps his armor on the table for Merlin to clean.

If I’d written this episode, I would have changed… I'm having a hard time thinking of something. Even though there were things I didn't particularly like about this episode, I dont know if I would necessarily change anything. I'll be honest, though, I'm writing this fairly drugged up after some stupid dental work. (Vicodin, I love you for taking my pain away) so perhaps my mind isn't working very well. All I can think of while I write this is Colin Morgan's collarbones. And yes, I know I think about them while NOT on medication but I usually have the ability to think outside that particular tasty box. But right now, not so much. So you have my apologies now, if this post is in anyway weird or goes off on tangents. Usually leading right back to collarboooooooooooooooooones.

The thing(s) I loved about this episode – I can sum this up in pictures.

The thing(s) I hated about this episode – A recurring theme for this question and the series, frankly...Uther ignoring Gaius' warnings. It pisses me off so much!!
Also hated Arthur tossing Merlin aside so readily. Pissed me off. And Merlin so sad, jealous, heartbroken.... "Everything I do is for him..." I just wanted to hold him and make it all better, while nuzzing his collarbones, and maybe his killer cheekbones too. But definitely the collarbones. And it would make him feel better, dammit!

Something I never noticed about this episode before – Um, not sure about his one either. One thing I am WONDERING about... I want to know more about this Sigan dude. When the hell was he around? Was he a king as well as a sorcerer? Cause if he wasn't a king (or royal or whatever) why the hell is he buried below the castle? (Was this in the episode and I missed it???? I'm so confused).

And him being king at one point doesn't even make sense anyway. Becaues he vowed to destroy Camelot didn't he? Then why bury the dude, his magical soul stone, and his riches in Camelot? Under the freaking castle???? This makes no sense to me. Oh! Maybe this should go under what I would change...explain more about this Sigan dude, FFS.

Favorite costume – Cedric/Sigan's raven-y thing. It's just so ridiculous, it's totally my favorite. I could totally rock the hell out of that thing right now. (And it's freaking practical; I"m a bit chilly) 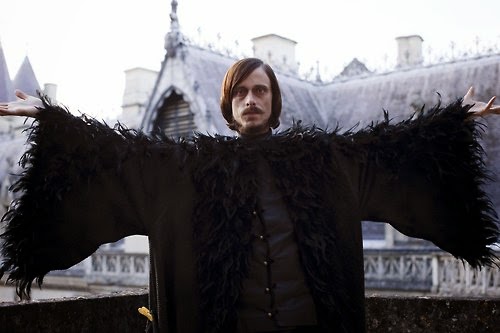 Here is proof of some random head canon I’ve created – I don't really have anything. I would say Merlin being there almost instantaneous when Arthur calls him while in bed, but when Morgana had a nightmare, Gwen was there pretty quick too, and both servants have homes away from their employers' rooms. So not exactly proof, but I'll take it.

OH! Perhaps the strength of Merlin's jealousy and dislike towards Cedric. That hints to stronger feelings doesn't it? It surely does in my mind. (I know you are so surprised by that admission) And to physically fight Cedric... Yeah, Merlin loves his prat.

What would Bron steal from Camelot in this episode? Morgana's bedside table. 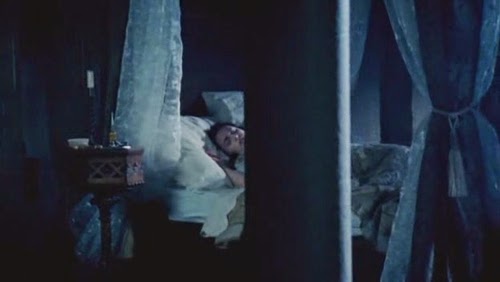 What made Jen lose her shit (in a good or bad way) in this episode? The appearance of her favorite costume of the series. 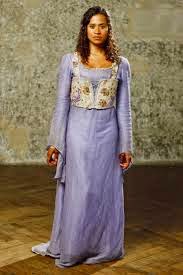 
Until the next episode – The Once and Future Queen – which we’ll be watching Monday, 4/28, at 8pm EST. We’ll be on Twitter with the hastag #MerlinClub
Posted by Jess Jarman at 8:00 AM