MERLIN CLUB: GOBLIN’S GOLD
Or the One With Gaius Licking Stuff and Making Bron Throw Up in Her Mouth a Little

RECAP—So Merlin’s down in the library – which is in dire need of a clean. Geoffrey needs to get on that – to get Gaius a book. While there, he finds a secret chamber where he finds a box. Noises are coming from the box, and despite my yelling at the screen for him NOT to do it, Merlin opens the box.  Out pops a goblin. 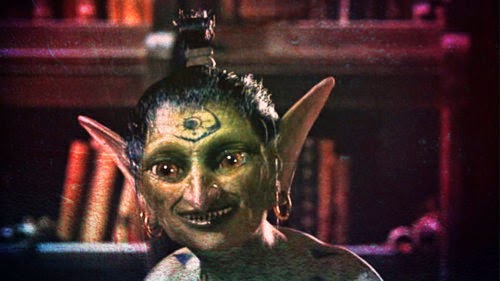 It causes mischief and, when Melin tries to get it back in the box, it transforms into a little light and escapes from the chamber. Merlin races after it, and finds that it’s made a HUGE mess of Arthur’s rooms. Arthur comes along and demands an explanation and Merlin – brilliant liar he is :-/  – says he’s spring cleaning. He  sees the goblin leave and chases after it. It goes after Morgana’s jewelry but makes a quick escape out the window when Merlin comes in. As he’s trying to put the jewelry away, Gwen walks in, who doesn’t even question what Merlin is doing on the floor with Morgana’s trinkets. WTF, Gwen?

Back in Gaius’ chambers, Merlin identifies the creature as a goblin and Gauis warns him that goblins are mischievous and dangerous and desire nothing more than gold. Arthur comes in and says they need to come to the king’s chambers for an urgent and delicate matter. They come in and we see poor Uther has lost all his hair.

Bald as bald can be. And ASH pulls it off, the bastard.

Alone again, Gaius tells Merlin it has to be an enchantment from the goblin for Uther to lose his hair like that, and when Merlin giggles over bald Uther, the physician takes him to task, reminding him what Uther would do to whoever was responsible for releasing the goblin. They work out a plan to trap the creature, using gold as a lure.

That night, Merlin swipes a chest of gold coins from Arthur’s chambers. He breaks a dish on the way out and wakes the prince. Melrin uses magic to make the bed curtains fall on Arthur, giving him a chance to escape unseen. Using a trail of gold coins to lead the Goblin into their chambers, Merlin and Gaius try to capture the creature, but it again turns into the bit of light and enters Gaius. Merlin doesn’t notice, but the older man is clearly possessed by the goblin and sends the young man on a wild goose chase after the “escaped” goblin.

The goblin, as Gaius, tears the chambers apart, looking for gold. When Merlin returns, it orders Merlin to clean up and heads out to the tavern. Which confuses Merlin. At the tavern, Goblin!Gaius arm-wrestles and wins lots of gold. And there is lip licking and it’s kinda gross. The next morning, a hungover Goblin!Gaius sends Merlin out for his breakfast. Morgana comes in asking for a sleeping draught as her bracelet has been stolen. The goblin mocks and makes fun of Morgana then tells her he sees into her cold heart and knows how she really feels about Uther. He gives her an enchanted sleeping draught and she leaves.

Goblin!Gaius goes around town, lies about the severity of peoples conditions and making up sickness to get gold out of them – Gwen included. He also manages to slap Uther around on the head as he “treats” what has caused Uther’s hair loss.

Back in Gaius’s chambers, Merlin catches him licking coins and finally realizes it’s the goblin. 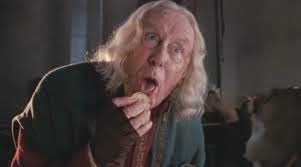 The goblin warns him that if he tries to hurt him, he’ll only hurt Gaius.

While Arthur gives Uther a report about vandalism around the castle, suddenly the king, Morgana and Gwen all start farting – a result of the goblin’s enchanted remedies.  There is much horror and Uther dismisses everyone. When Merlin later confronts the goblin, the creature realizes that Merlin has magic. The young warlock promises to free Gaius and goes to look for Arthur.

When he finds the princes, Arthur orders the guards to arrest him. Turns out the goblin has blamed Merlin for all the things going on and shows Uther a book of magic he claims to have found in Merlin’s room. Merlin tries to tell them Gaius is possessed but without proof, no one believes him. Uther orders his execution. But, wait! Arthur isn’t quite as convinced as the others and seems to suspect something.

Later in the tavern, Goblin!Gaius has a confrontation with Sir Leon (SIR LEON! How very DARE he??) but he apologizes. Then he serves the knights drinks he put some potion into…it causes ugly boil-y things to break out all over the knights’ faces.

In his cell, Merlin magically takes the keys off a sleeping guard. He flees, and when the warning bells sound, he hides at Gwen’s. The next morning, he asks her to talk to Arthur about Gaius being possessed. She’s embarrassed and hesitant…you know because of the farting…but agrees to do it. Arthur invites Gaius to his rooms and when the old man seems happy about Merlin’s upcoming death, Arthur’s suspicions are confirmed—because Gaius would never be happy about that no matter what Merlin had done. Arthur draws his sword but the goblin knocks him out.  When Gwen comes to him, she finds that Goblin!Gaius has given Arthur donkey ears and the prince can only bray like the animal.

Merlin finds out that if the host is dying, the goblin will be forced out of its body. He goes to get the box that once contained the goblin so they can trap it again. Then he puts poison on the gold coins the goblin has hidden. The pair hides in Merlin’s room and watch as Goblin!Gaius comes in. When it licks the coins, Gwen is once again the voice of we the people, saying it’s disgusting. Yes, Gwen, yes, it is! They come out as the goblin leaves Gaius’ body. It knocks into Gwen, who was holding the antidote to the poison—which was to be administered quickly. To bottle flies into a bunch of other bottles and now she doesn’t know which bottle is the antidote. Let this be a lesson to us all – label shit clearly.

The goblin tries to possess Merlin but he managed to spit it in the box and seal it closed. Merlin and Gwen search for the antidote and eventually try the one they think is it. After a couple long moments of thinking maybe they gave him the wrong one , Gaius wakes and is back to normal.

The physician tells Uther Merlin is innocent and that he was indeed possessed and the goblin was the one who did all those things. Merlin is pardoned and Uther orders the box be sealed in the vaults (because that always works, right?). When Uther asks who let the goblin out to begin with, Gauis says he has no idea.

Later Gwen and Arthur run into each other and there is an awkward moment. They agree to never speak of what happened the last few days. As Merlin and Gaius watch Arthur train, Arthur laughs but it sounds like a donkey’s bray. Merlin says it’s just too good and he’ll leave the spell, just a little, for one more day.

If I’d written this episode, I would have changed…While this isn't my favorite episode, there isn't really anything I'd change. Well, maybe less licking on Goblin!Gaius' part. (though Richard Wilson did a bang up job as Goblin!Gaius, IMO)

Thing(s) I loved about this episode—Donkey!Arthur. Hands down. Especially when Gwen scratches his ears...fave part of the episode.

Thing(s) I hated about this episode—No shocker here, excessive licking.
And also, how no one realizes Gaius is not himself. Especially Gwen who is normally so intuitive about these things.

Something I never noticed about this episode before—It wasn't until Jen pointed it out and I was rewatching again...it really does look like ASH was trying not to laugh as Gaius/Richard Wilson was smacking his head. I think the whole episode must have been a hoot for the cast to film.

Here is proof of some head canon I’ve created—None in this episode. :(

Favorite costume—Because it delights me. FFS, Uther, you're the KING; you couln't have found a better hat? But I never tire of seeing it. 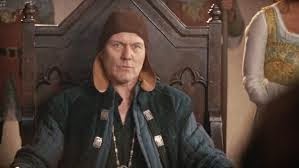 What would Bron steal from Camelot in this episode? Hmmm I can't think of anything...WAIT! She'd steal all the gold from Camelot so Goblin!Gaius has nothing to slobber over!

What made Jen lose her shit (in a good or bad way) in this episode? That Morgana went to Gaius for a sleeping draught. And I agree. It did seem as though she at least suspected Gaius was on to her and Merlin clearly was. So why would she go to Merlin's mentor for a potion that could easily be poisoned? It doesn't make sense.

NOTE: We won’t be Merlin Clubbing it next week (8/4). Jen, Bron and I will be attending the Authors After Dark convention so we are taking the week off of Merlin Club. But we’ll be back the next week….AND I’ll still be at Bron’s so we get to watch together…IN PERSON! YAY!!!!

So, until the next episode – Gwaine – which we’ll be watching in TWO WEEKS on 8/11 at 8pm EST. We’ll be on Twitter with the hashtag #MerlinClub
Posted by Jess Jarman at 8:00 AM