MERLIN CLUB: THE NIGHTMARE BEGINS
Or the One Where Creepy Mordred Returns...WITH DR. MOON!

RECAP – It’s storming in Camelot and Morgana is having a nightmare. A candle magically lights as the she drams. Gwen enters the room (Why is Gwen still there? It’s awfully late?) blows out the candle and moves it over by the window. After Gwen leaves, Morgana wakes, panicked, and her eyes flare gold and the candle lights again, flames high and starts the drapes on fire. The windows exploded. It’s all very dramatic. 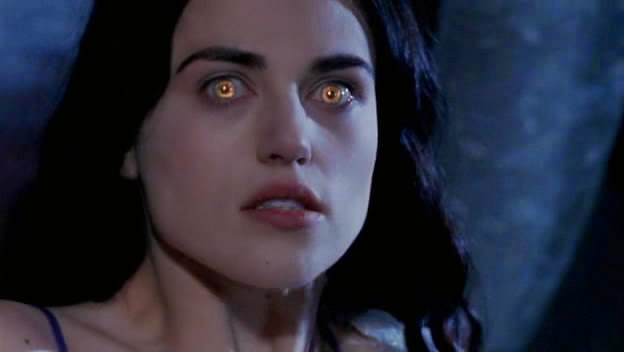 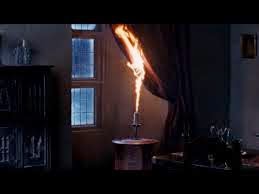 The king, prince, Merlin and Gwen are in Morgana’s room after the fire. Uther, of course, suspects sorcery. 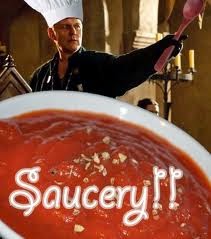 Morgana tells Gaius it was she who started the fire, fearful that she has magic. Merlin, the fucking adorable creeper he is, is listening to the conversation. Gaius tries to comfort Morgana and convince her that surely she doesn’t have magic. His solution…another draught. Yes, Gaius, drug her harder. That’s the way to go.

After she leaves, Merlin talks to Gaius and tries to convince the older man to talk to Morgana about what is really going on with her. Gauis disagrees and warns Merlin not to get involved. Merlin brings Morgana flowers to cheer her up, Arthur sees and is a wee bit jealous. And freaking adorable while he's at it.

That night, Morgana goes to bed and, when frightened by lightning, her magic reacts and shatters a vase.

She races to Gaius’ chambers, but the physician is not there. She speaks to Merlin instead.

Merlin goes to the Great Dragon and asks where the Druids are—he believes they can help Morgana. The dragon says it would be better if Morgana never knew the full extent of her powers and refuses to help Merlin.

The next day, Arthur is still investigating sorcerers who could be involved in what happened in Morgana’s room. He asks Merlin about the flowers for Morgana and his apparent affections toward her. When he is distracted, Merlin reads a scroll on the table – it has the names of suspected sorcerers and Merlin hopes one of them can help him find the Druids.

In the lower town, people on the list are being rounded up, arrested for sorcery. Merlin uses magic to enter the house of Forridel, a woman suspected of consorting with Druids. He begs for her help to find the Druids, and, after some hesitation, she agrees. That night, Merlin visits Morgana. She tries to explain away what she said the night before as rambling caused by exhaustion. Merlin says he can help her, that he understands how scary all this must be. He says the Druids may be able to help and he knows here they are.

The next morning, the alarm bells are ringing. Uther is convinced that Morgana has been kidnapped. Gaius confronts Merlin  and is angry when Merlin admits what he’s done. He says that Morgana doesn’t have anyone to help her, not like Merlin has Gaius. The older man understands but fears what the consequences of Merlin’s actions will be.

Uther announces that unless Morgana is returned, all the prisoners will be executed.
Hearing this, Merlin sets off to find her.
At night, we see Morgana walking through the woods (in her stunning red cape, like you do when you’re meaning to be stealthy and sneaky). Suddenly she is surrounded by Serkets – these huge scorpion type things.

They attack, injuring her leg, but as she’s about to pass out, she sees a man walking through the creatures and the Serkets run away from him. Morgana wakes and finds the man who saved her.
He assures her she is safe. Turns out it was the Druid boy Mordred who told Aglain where to find her. Mordred says he will care for her as she cared for him before.

Back in Camelot, Uther orders Arthur to find the Druids, telling him to take no prisoners. He feels he has been too lenient on the Druids. *sigh*
Arthurs asks Gaius where Merlin is, assuming he’s upset over Morgana’s supposed abduction.

In the forest, Merlin is searching for the Druids and Morgana. He hears voices in his head and that leads him to their camp.

Gaius meets with Uther and brings up the possibility that Morgana may have run away on her own. Perhaps she wasn’t kidnapped. Uther disagrees, saying Morgana would never run from anything, just like her father. He says that if she died, a part of him would as well.

Aglain questions Morgana about her reasons for seeking out the Druids, and she tells him and asks for his help. Aglain confirms that she has magic, but that she shouldn't be afraid of it. She is safe with the Druids. When Aglain leaves the tent, Merlin comes in, surprising Morgana. He says she needs to return to Camelot, that Uther believes her kidnapped and people’s lives are at risk. Aglain returns saying Arthur and his men are there  and they need to run. The camp is invaded by Camelot’s solders and the Druids flee. Morgana is seen running away with Aglain and Mordred and pursues the trio. Merlin, wanting to give them a chance to get away, sends them on then uses magic to create a dense fog to disorient Arthur and his men.

Morgana is having difficulty because of her injured leg, and Aglain is shot. Mordred continues to run but is soon surrounded by solders. As Merlin watches, Mordred screams and the solders go flying back, allowing Mordred to escape.

Arthur returns Morgana to a teary and grateful Uther, who embraces her. Arthur says that Uther was right; the Druids had kidnapped her.

Later that night, Merlin visits Morgana and promises to never tell anyone her secret. She says she is not scared of who she is anymore and that maybe someday people will see magic as a force for good. As he leaves her chambers, Merlin is stopped by Arthur. The prince tells Merlin to stop denying his feelings, but then says he cannot hope for a relationship with Morgana. That he should turn his sights on someone more at his level.

When Merlin returns to his and Gaius’ chambers, he apologizes. But Gauis is just glad he is safe and hugs Merlin. When Gaius learns that Morgana is aware of her magic, he advises Merlin to look after her and make sure Uther doesn’t find out.

If I’d written this episode, I would have changed… I don't know how to answer this! This is a hard one for me. Because, as you'll see below, there are things I didn't like about the episode and would change BUT the things I would change...they wouldn't just change the episode. They'd change the whole course of the series. Merlin being honest with Morgana, for example. If they were able to talk about their magic and have each other...well, that would just change everything, wouldn't it?

The thing(s) I loved about this episode – I love that, even though Merlin isn't completely honest with Morgana (see what I hated below), he DOES try to help her. It ends horribly, of course, but he really does care and tries to help.

Loved Aglain. When he says that Morgana shouldn't hate or fear Uther, that she should pity him...just wow. Yes, the Druids are evil magic users out to destroy your kingdom, Uther. *sigh*

Lastly, there was some lovely scenes with Merlin sans neckerchief, and you KNOW how much I love those.

The thing(s) I hated about this episode – I hate that Merlin doesn't confide in Morgana. I get it - between Gaius and the damned dragon, he doesn't know what to do. But his damned instincts are to be honest with her. He should totally follow those. Of course, THAT would have changed everything. (For the better, IMO, but it's not my story to tell.)

HATE THE DRUGGING MORGANA. I was yelling at Gaius during this episode.

Uther, as usual, pisses me right off. Yes, Your Majesty, I'm certain that killing all the suspected sorcerers you've arrested is exactly what it will take to make the Druids return Morgana. Seems logical to me. :-/

Also something is bugging me. After the fire in Morgana's room and Uther is convinced it was sorcery, he tells Arthur to arrest everyone they have under suspicion. This doesn't ring true AT ALL. If someone was under suspicion, how are they still living? It's been proven time and time again that Uther doesn't need PROOF or EVIDENCE that someone used magic to execute them. Just the suspicion or, hell, CONSORTING with a sorcerer is enough to set someone on fire or take of their head. So this makes no sense to me and bugs me like you wouldn't believe.

Something I never noticed about this episode before – I didn't notice that Aglain was Dr Moon from the "Silence in the Library" and "Forest of the Dead" episodes of Doctor Who. How did I miss that before? It doesn't surprise me...I mean there are like a dozen actors in all British television, and half a dozen locations. ;-) Or so it seems. LOL 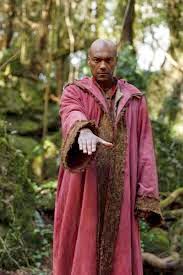 Here is proof of some random head canon I’ve created – Don't have much here. I suppose adorable jealous Arthur makes me think Merthur. Does that count? LOL

What would Bron steal from Camelot in this episode? The table in Arthur's chambers. Gorgeous wood work. Reusing scroll .gif to show it. :D So ignore the scrool and check out Bron's new table! :-D

What made Jen lose her shit (in a good or bad way) in this episode? The not being honest with Morgana and the fact that, instead, Gaius just keep drugging her some more.

Until the next episode – Lancelot and Guinevere – which we’ll be watching Monday 5/12, at 8pm EST. We’ll be on Twitter with the hashtag #MerlinClub