MERLIN CLUB: The Moment of Truth

MERLIN CLUB: THE MOMENT OF TRUTH
Or The One I've Been Waiting For... MERTHUR GALORE!!! And Merlin's Mama SHIPS IT!!!

RECAP - The episode opens in Ealdor - Merlin's home village. We meet - not really sure what he is exactly, but he feels he has the right to stroll into Ealdor and take the village's harvest. He gets really pissed off because a farmer has kept some of the food so they wouldn't starve. A woman rushes forward and Kanen back hands her for her interference. He gives the townspeople a week to get the rest of the harvest ready for him.

The woman goes to Camelot and we find out she is Merlin's mother, Hunith. And omg, friends, Merlin's expression when he sees his mother's bruised face and demands to know who did this to her... *Jess' panties spontaneous combust* 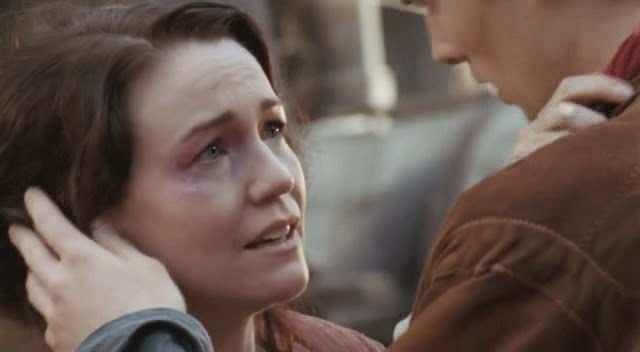 Although Ealdor lies in Cenred's kingdom, Hunith begs Uther to come to their aid. (We find out later that Arthur is the one who arranged for her to have an audience with is father...because that's what you do for the mother of the person you love, dammit!). As she is explaining the situation, Uther seriously couldn't look less bored. It's maddening.
Uther says he wishes he could help but sending soldiers to Ealdor would be seen as an act of war to Cenred.

Arthur apologizes, saying if it were up to him, they'd be on their way to Ealdor now. Merlin tells Arthur that he has to go to back  to help his mother. Arthur says of course, but you'll be back, right? Merlin clearly doens't want to leave Arthur but it's his mom, and he says as much. Arthur says he understands and would do the same in Merlin's place. Merlin says it's been an honor serving him, and Arthur makes jokes about how horrible Merlin has been as a servant, but there are meaningful looks here, people, and we know that Arthur really does value Merlin.

Merlin goes to Gwen and askes for a sword. And poor Merlin knows nothing about weapons, obviously...

She helps him pack some things and when he protests that he won't be able to carry it all, she and Morgana inform him that he won't have to, because they are coming with to help.

When they camp for the night, Hunith says the girls shouldn't be there, especially the Lady Morgana. She also makes Merlin promise not to reveal his magic. When he's trying to sleep, Merlin hears a noise and goes to investigate, sword ready. Turns out to be Arthur. He's come to help. (And Jess becomes an even bigger mess than before because....*whispers* Meeeeerthuuuuuur)

When they arrive in Ealdor, it's to find Kanen and his men threatening the village again. They fight him off - or mostly Arthur does and he looks mighty fierce and fine doing it. Kane and his men leave, but not before Kanen spouting more threats. Arthur tries to talk to the villagers but Will, Merlin's old friend, argues. He says they need to give Kanen what he wants. That fighting will get them all killed. The villagers - beginning with Hunith - say they'll follow Arthur against Kanen. Merlin tries to talk to Will, but his friend thinks Arthur is here just for the glory. Merlin argues that Arthur is his friend, but Will asks if Arthur knows about Merlin's magic. He says if he was a real friend, Merlin would tell him.

Now, we get to the pillow talk portion of the shower. Sadly, folks, they are laying on the floor head to foot with each other, but it's okay, the moment is still lovely. Arthur asks Mrlin why he came to Camelot. Merlin says he wanted to find somewhere he could belong. Arthur asks if Merlin's found that, to which Merlin responds, he doesn't know yet.

The next morning Hunith tells Merlin that she can tell Arthur truely likes him.
Merlin laughs this off, saying if Arthur knew about his magic, Merlin would be dead. Merlin goes to gather wood and is confront by Will. His friend tries to convinces him to use magic to defeat Kanen and his men. When Merlin refuses, Will is angry because he feels Merlin is putting Arthur before his family and friends.

Arthur works with the men in the village, trying to train them as best he can. Morgan points out that they are outnumbered and women should be allowed to fight, but Arthur poopoos that suggestion quite quickly. Merlin later overhears the girls talking about why Arthur came - because of Merlin, of course.

The man they had as a lookout is killed and his body sent back on his horse with a note from Kanen. It threatens to massacre the entire town the following day. Will accuse Arthur of being responsible for the man's death and makes plans to leave before Kanen and his men get there. Merlin tries to stop him but his friend calls him a traitor for not being willing to do anything he can - magic - to save their friends.

Merlin explains to Arthur that Will's distrust for nobility comes from his father being killed while being in the service of the king. Arthur is afraid will is right - that everyone will die. Merlin - King of the Pep Talk - convinces him that he has to have faith. That and his training will give the villagers the strength to win. 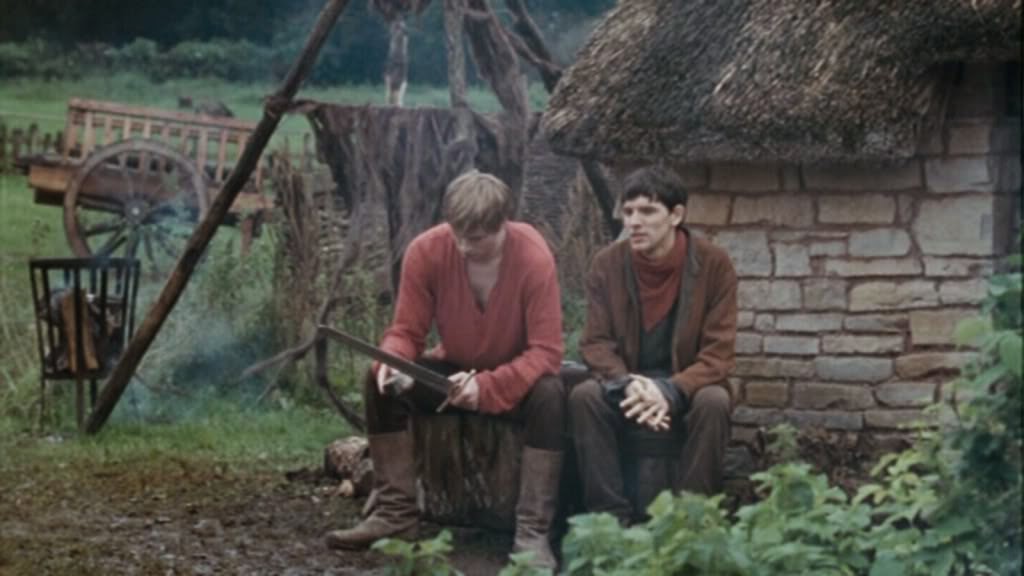 Gwen argues with Arthur when he tells the women to leave the village before Kanen arrives. Finally he agrees that htey have just as much right to fight for their home as the men do. He gives quite the speech and pumps everyone up.

Hunith tells Merlin she's afraid of Arthur discovering his magic. Merlin tells her that if Arthur is a true friend, he will accept Merlin no matter what. As they ready for battle, Merlin nearly tells Arthur the truth, but is interrupted by Morgana telling them Kanen and his men have crossed the river. We see them arrive to a seemingly empty village, but they are suddenly trappped by fire and barriers yanked up by villagers, who then come out to fight. Merlin nearly gets hurt but is saved by Will. As it looks like the battle is lost, Merlin uses magic to create a whirlwind which sends Kanen's men running.

Kanen, though, stays, calling Arthur out specifically. They fight and Arthur ends up running him through. Arthur then demands to know who conjured the whirlwind, saying he knows magic when he sees it. (Really, Arthur, really?) A dying Kanen, not completely down, tries to fire a crossbow at Arthur. Will pushes him out of the way and ends up taking the arrow himself. He's brought to Merlin's home where he says he is the sorcerer and he conjured the whirlwind. Arthur leaves the friends alone. Will says now Merlin has the chance to to be a servant to a great king. 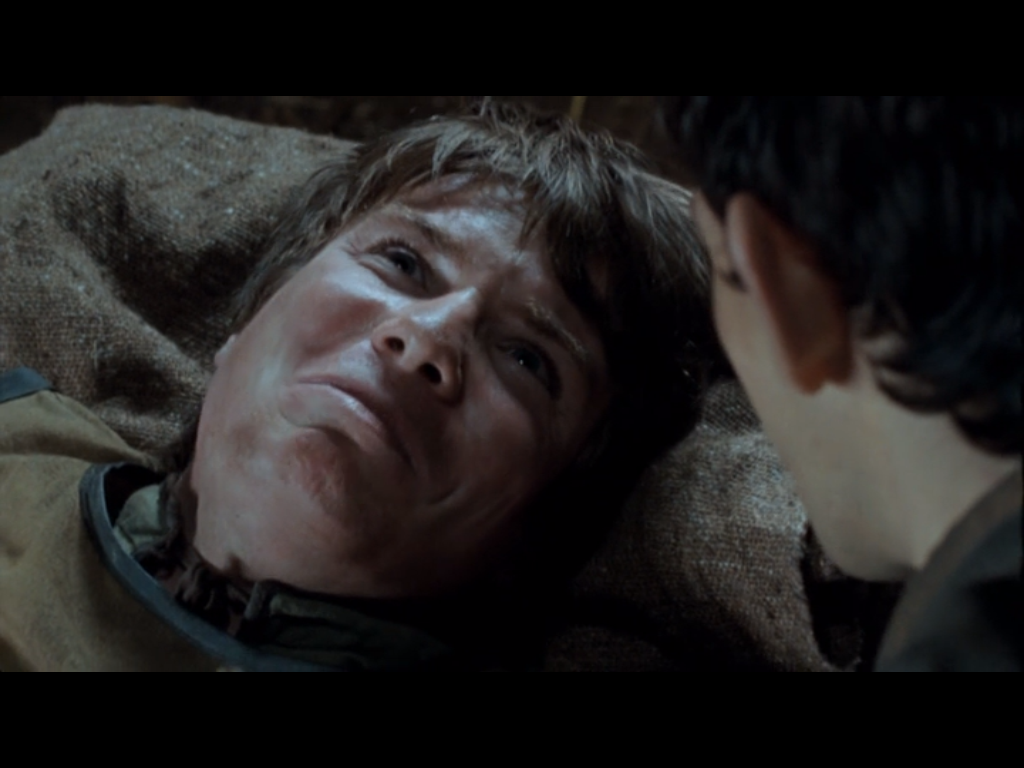 He dies and Merlin cries (which makes ME cry, dammit). As Will's body burns on a pyre, Arthur asks if that's what Merlin was trying to tell him before the battle - that Will was a sorcerer. Merlin says yes, that's what it was. Arthur is upset that Merlin didn't warn him before because he knows how dangerous magic is.

Merlin tells his mother that he doesn't have to go back, but she insists he does.

She says that some day, when the time is right, the truth will be known but until then it's better for everyone that he keep his magic a secret.

If I'd written this episode, I'd have changed...Not much to be honest. I loved this episode. I guess I wouldn't have had Will die. More on that a couple questions from now... :)

The thing I loved about this episode: Um, the Merthurness of it! After the last couple episodes that were sorely lacking, this episode....well, it gave me everything I need. I have nothing else I can say. You all know me. I hardcore ship Merthur. So this episode....

The thing I hated about this episode: That Will died. I thought the relationship between him and Merlin was awesome and there was a lot of ways the writers could have gone with this, but perhaps they thought it would detract from the developing relastionship between Arthur and Merlin? I just hate that Merlin had to lose someone so close. :( And it made me cry.

Something I never noticed about this episode before: Okay, confession time. I've watched this episode a lot. I can't even tell you how many times. So there really isn't anything new, I guess. I tried to claim on Monday that I never noticed how sexy Colin Morgan looked all windswept, but Jen totally called me out on that one. :-)

But despite that I'll claim it again. If only to be able to gaze at this picture again. Here you go, friends. After the whirlwind, windswept Merlin. 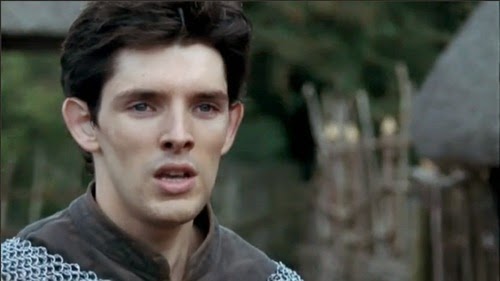 Favorite Costume: While I do NOT like the necklace, the rest of this...lovely. 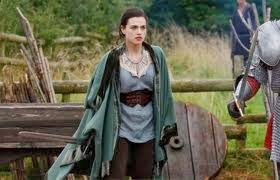 What would Bronwyn steal from Camelot  Ealdor in this episode? There wasn't much to chose from was there. I guess I'd have to use the same answer twice...Morgana's costume above.

What made Jen loser her shit (in a good or bad way) in this episode? Oh I don't know. This is my hard question of the week... How utterly bored Uther looked while Hunith was begging for help? How long it took Will to die, longer than Alan Rickman in Prince of Theives, I believe she said....

Until the next episode - The Labyrinth of Gedref - which we'll be watching Monday, 3/31, at 8pm EST. We'll be on Twitter with the hashtag #MerlinClub