MERLIN CLUB: The Gates of Avalon

MERLIN CLUB: THE GATES OF AVALON
Or the One Where Jess Says "What? No mouth-to-mouth scene????"

RECAP –The episode opens with Morgana having a nightmare about Arthur. He’s drowning while a woman stands above him watching. 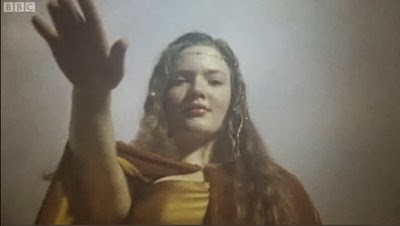 While hunting, Merlin and Arthur come across a man and woman being attacked. Arthur fights the men (bandits? Robbers?) off, though Merlin helps magically unbeknownst to Arthur. The woman, Sophia, turns out to be the one from Morgana’s dream and she is with her father, Aulfric. Both have these staffs that look suspiciously magical but this doesn't seem to be noticed. 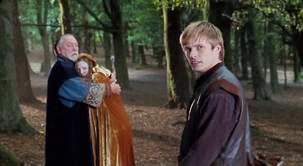 They are brought to Uther, and we find out that Aulfric is the heir to the kingdom of Tír Mòr, which has been taken by raiders. He and Sophia are traveling to other family. Uther invites them to stay in Camelot for a while.

Sophia is put in the room next to Arthur’s. It’s pretty clear Arthur is into this chick. Morgana sees Sophia, and freaks out. She goes to Gaius and tells him her dream and that Sophia was the woman in the dream. Gaius tries to calm her down and gives her a sleeping draught. He tells her not to bother Uther with this – it’s just a dream.

Aulfric returns to the forest to the one bandit who survived. He had paid them to attack them. He kills the man using magic. Despite the sleeping draught, Morgana has the dream again.

The next morning, Arthur and Sophia go riding. Arthur convinces Merlin to cover for him since he’s skipping patrol to do this. Gwen tells Morgana to go to Uther about the dream, but Morgana fears that the king will punish her for sorcery. And can you blame her??

Meanwhile, Uther realizes that Arthur is missing. Merlin covers for him, taking the blame for his master’s absence. This lands him in the stocks.

In the forest, Sophia starts to chant a spell or something on Arthur but are interrupted by some knights. She gets awfully pissed when he comes close to touching her staff. But Arthur doesn't seem to think this strange. They go back to Camelot. When Merlin comes back to Gaius’ chambers and explains how he was in the stocks and why, Gaius grows suspicious of the guests especially in light of Morgana’s dreams. He searches Aulfric’s things and finds his staff, which has runes carved into it. He’s caught by Aulfric but manages to come up with an excuse and hightales it out of there. He did see Aulfric’s eyes flash red, and this deepens the mystery of who, or what, Aulfric and Sophia are.

Morgana confronts Sophia, saying she’ll hunt Sophia down if she hurts Arthur. Sophia taunts her, implying that Morgana has feelings for Arthur and she is merely jealous. 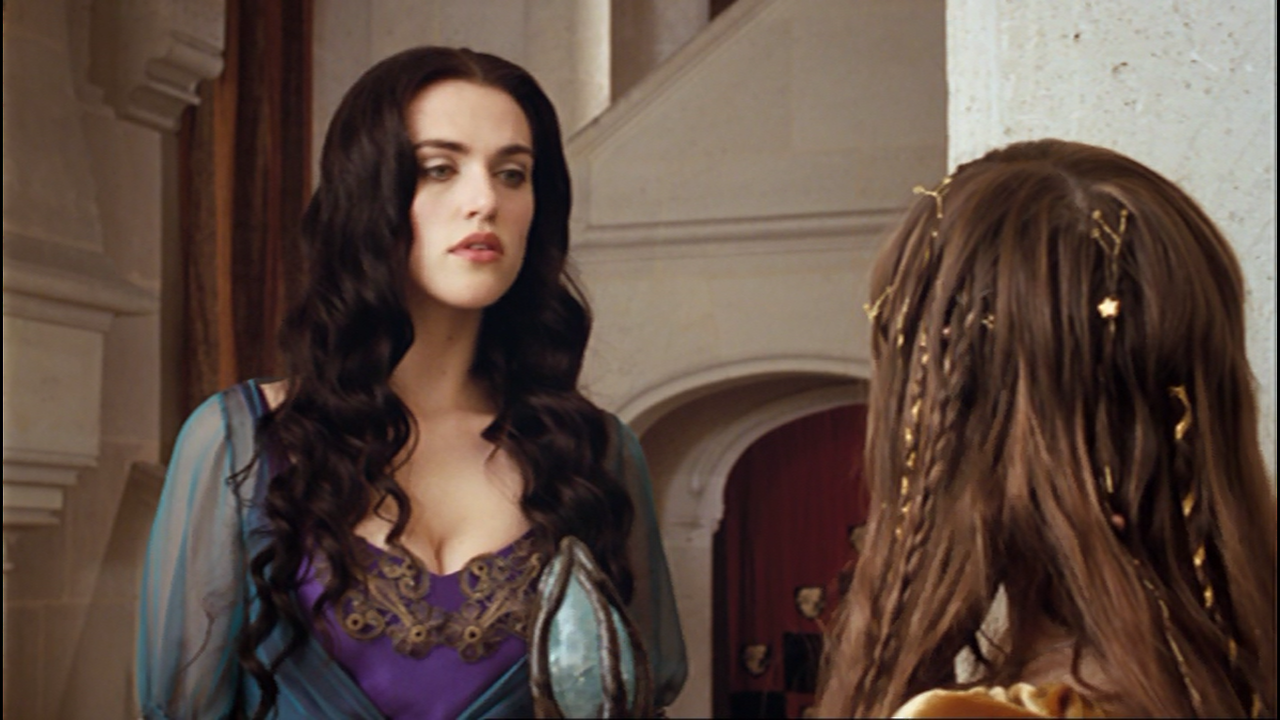 When Sophia rejoins her father, he asks why she hasn’t completed her mission. They want to reopen and enter the gates of Avalon. They agree that the enchantment must be done by the next day.

Morgana tries to warn Arthur about Sophia but he is a giant ass. Convinced she is jealous…because it’s all about getting into Arthur’s pants, doncha know?
The day, Arthur asks Merln to cover for him again so he go out with Sophia again. Aaaaaaaand, there’s Merlin in the stocks again.

Sophia successfully casts her spell and Arthur is now under her control. 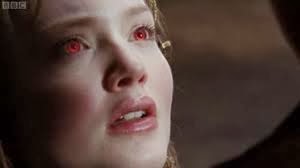 When Merlin returns from the stocks, Gaius tells him that Morgana is a seer – able to see the futre in her dreams. He has known for a while but has been giving her sleeping draughts and hiding it to keep her safe from the king. He shares his concerns fro Arthur based on Morgana’s dreams and what he found in Aulfric’s room. Later, Merlin overhears Sophia telling her father that the spell worked and that they can now use Arthur as they wish.

Merlin then follows Aulfric to a lake, where he summons the Sidhe – weird, ugly blue fairy type creatures. 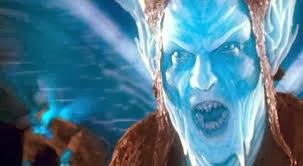 Turns out Aulfric and Sophia were bansished from Avalon because Aulfric killed another Sidhe. Aulfric has to stay human, mortal, but Sophia can return if they sacrifice a prince to the Sidhe.

The next day, Arthur asks Uther for permission to marry Sophia. Uther denies this request and there is this weird ass exchange between Uther and Morgana that is like a married couple discussing their child.

Uther says Arthur is too young to marry and threatened to arrest their guests if Arthur pushes this or defies him. Afterwards, Uther and Morgana are walking in the halls and the weird assness continues. 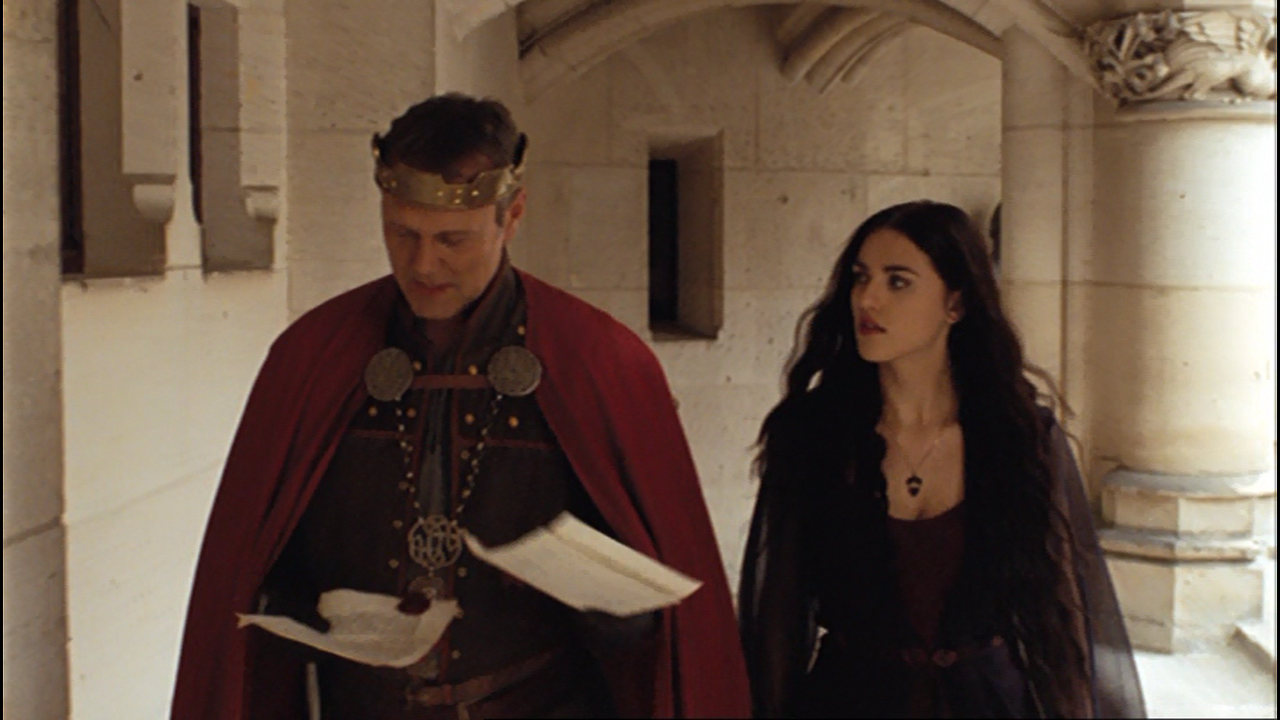 Morgana nearly tells Uther about her dreams but she doesn’t. Merlin tries to warn Arthur but Arthur is too far under Sophia’s control and she and Aulfric come in and Aulfric knocks Merlin out by throwing him magically against the wall. Morgana sees Arthur leaved with Sophia and her father and rushes to tell Gaius.

Gaius finds Merlin and tells him what has happened. Merlin rushes after them to the lake. Sophia learns that Aulfric cannot return to Avalon with her and she’s all teary about that but then begins the ceremony at his urging. He warns her that if the Sidhe don’t claim Arthur’s soul they will take hers. When Merlin arrives, Sophia has Arthur under the water. He grabs the staff that she has left on shore and kills both her and Aulfric.

He runs into the water and saves Arthur before the prince drowns.

Back in Camelot, Arthur wakes with no memory of what happened. Merlin and Gaius tell him he tried to elope with Sophia and that Merlin knocked him out and brought him back home. He’s horrified – more about the fact Merlin could knock him out than the elopement, I think. All agree to keep all of this from Uther and as a result, Merlin takes the blame for Arthur’s absence again. And, you guessed it, back into the stocks for our warlock.

Gauis gives Morgana another sleeping draught and makes Merlin promise not to tell her about her powers. Morgana has another nightmare.

If I’d written this episode, I would have changed…I've got a few for this one.
I didn't care for the dynamic between Uther and Morgana. It was very couple-y and made me feel squicky. They certainly didn't come across as guardian and ward, that's for sure.

Another thing is the lack of suspicion when it comes to Sophia and Aulfric. Strangers show up with staffs that are all magical looking and no one blinks an eye? In a kingdom where even a whisper of magic and someone is losing their head...Really? And Arthur doesn't think it strange when Sophia freaks when he reaches for her staff? Come on, now.

And after Merlin saves Arthur...BAM we cut straight to Camelot. Arthur was underwater for some time... I really think he would have needed some, ahem, reviving. Where was the mouth to mouth and Merlin fussing over him? Oh if only they had shown that...

The thing I loved about this episode – Merlin. How he is so willing to help Arthur and him running into the water to save Arthur...one of my favorites scenes.

The thing I hated about this episode – Arthur. God, he was such an ASS in this episode. The scene when Morgana tries to warn him, I wanted to kick his ass so badly. He assumes it's because she's jealous and then outright laughs when she says she had a dream about it. That's going to make her be open about her dreams in future, yeah? *eye roll* He deserves to be punished for his asshole-ness. I know Bron will be all over that, never fear.

And the way he was with Merlin... Sure, Merlin was all for covering for him, but man, THREE times in the stocks... Arthur owes him!

Something I never noticed about this episode before – Arthur's bedroom in this episode is NOT the bedroom he has in other episodes. I couldn't find a pic of it and it's driving me nuts. But it's not the same. It's smaller and situated all wrong.

And Merlin spends a good deal of time in this episode sans neckerchief (NECKERCHIEF WATCH 2014!) And you know how I love that. Hmmmm collarbones... 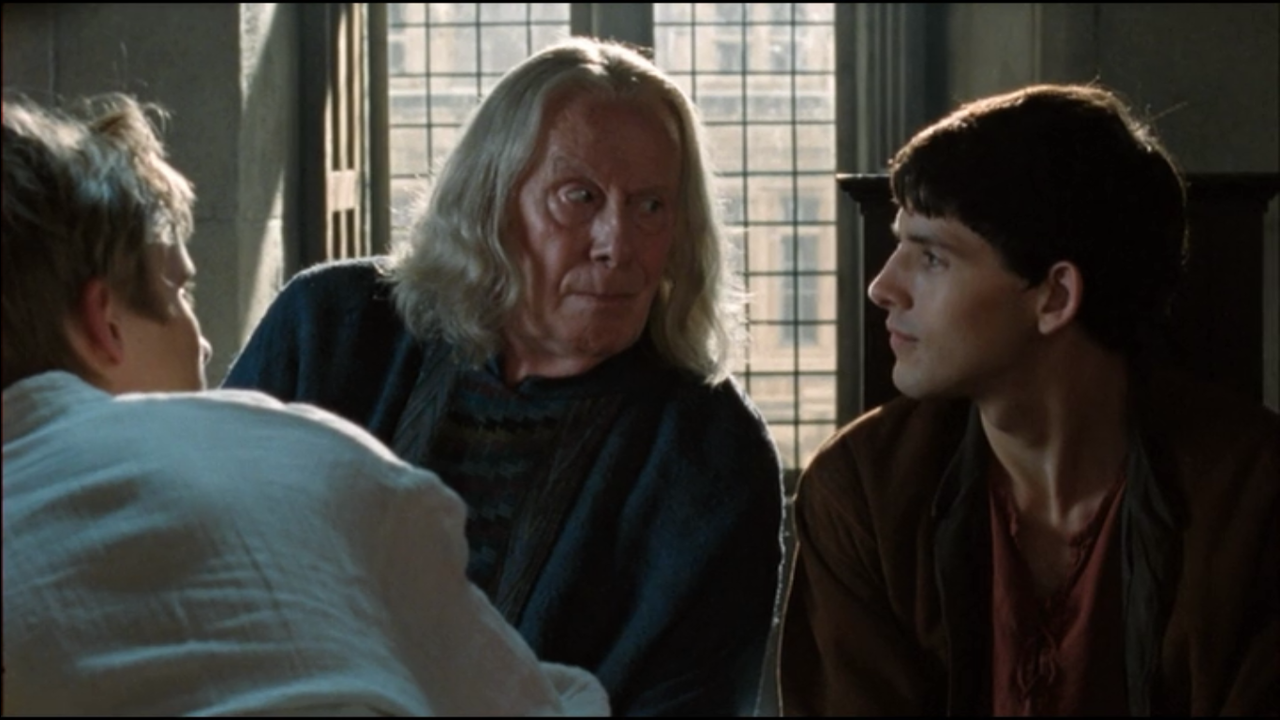 Favorite costume – I know I should say something about Morgana's fabulous stole or something but my favorite is...

Wet Merlin. You can't even see how fabulous it is here, but hmmmm. I know...I have a problem. And I'm okay with that.

Here is proof of some random head canon I’ve created – Again, I've thought and thought on this one, and I've got nothing for this episode. :(

What would Bronwyn steal from Camelot in this episode? Sophia's jewelry. 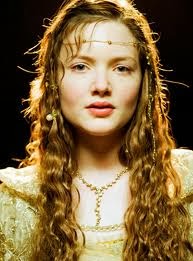 What made Jen lose her shit (in a good or bad way) in this episode? I think the Uther-Morgana dynamic did. But I also think how Gaius deals with Morgana would bug her. Drugging her to sleep to hopefully prevent dreams and keeping her in the dark that they are visions is not cool at all.

Until the next episode – The Beginning of the End – which we'll be watching Monday, 3/10, at 8pm EST. We'll be on Twitter with the hashtag #MerlinClub
Posted by Jess Jarman at 8:00 AM