RECAP – This episode opens with Nimueh incanting a spell with a flower in her pool of water. She puts the now clear petal into a silver chalice and menacingly says, "Merlin" as only she does. 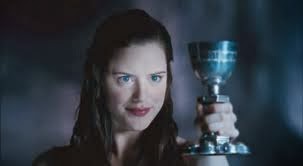 King Bayard of Mercia has come to sign a peace treat with Camelot. Nimueh is there, posing as a servant, Cara, and totally rocking a turban (covering up her crimped hair which makes Bron cringe every time she sees it.) She flirts with Merlin a bit when they bump into each other in the halls then she switches a goblet in Bayard's chambers with her poisoned one. A bit of banter between our boys...and Arthur shows Merlin the "ceremonial clothes" Merlin is to wear at the banquet. Merlin is less than thrilled . 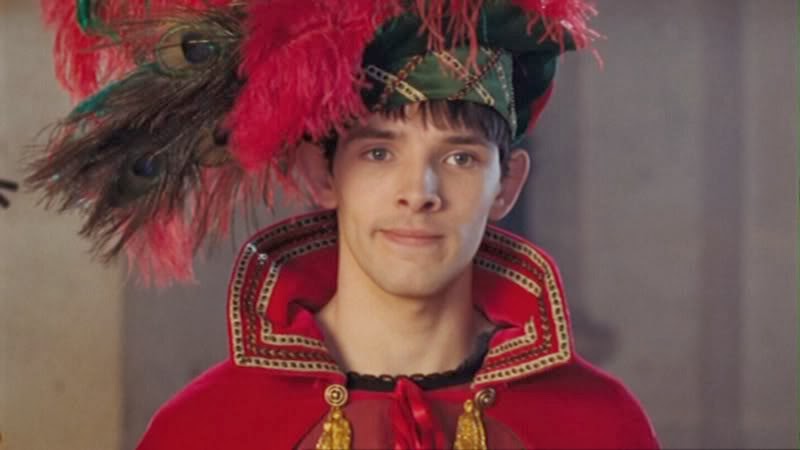 Though Arthur is quite amused. 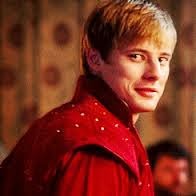 Later, when Bayard presents two goblets to Uther and Arthur, Nimueh pulls Merlin to the side and says she saw Bayard poisoning Arthur's. Merlin rushes back in and prevents Arthur from drinking from the cup. There is much arguing - Bayard is offended, Uther is just a dick, Arthur is trying to get Merlin out of trouble while calling him an idiot. It all ends with Uther ordering Merlin to drink from the cup. If it's poisoned, he wants the pleasure of killing Bayard himself, and if it's not, Bayard is free to do what he wants with Merlin. Arthur is particularly displeased with this arrangement (because he luuuuuurves Merlin) but Merlin bravely drinks. For a moment, it looks like all is well, but then Merlin begins to cough and grab his throat. He quickly collapses.

Just look at Arthur's face when he realizes Merlin is, indeed, poisoned.

It's no surprise that he is the first to Merlin's side.

Arthur carries Merlin to Gaius' chambers, with Gwen following with the poisoned chalice. Gaius discovers the poisonous flower petal stuck inside the cup and explains to Arthur it is the Mortaeus flower, and the only antidote comes from leaves from the same plant which is found in caves beyond the Forest of Balor. To go after the antidote would be a perilous journey. Arthur asks what would happen to Merlin without the antidote. Gaius says he only has days and would die a very painful death. Arthur decides he will go get it. Uther (surprise, surprise) forbids it, saying Arthur's life is more important that Merlin's. Even though I can see Uther's view, to a point - Arthur is his sole heir and needs to be kept safe - it's scenes like this that show what a douchecanoe Uther is.

Arthur: I can't stand by and watch him die!
Uther: Then don't t look.
Morgana goes to Arthur and says that Camelot would rather have a king who would save a servant than one who simply did what his father told him to.

Just a side note, how freaking gorgeous is Katie McGrath?

So Arthur heads off to get the leaves needed for the antidote. Meanwhile, Merlin is getting worse and it looks like the poison will kill him sooner than originally thought. After a bit of research, Gaius realizes that magic has been used to make the poison more potent and Nimueh is the one who is powerful enough to do such a thing.

In the forest, Arthur comes across Nimueh. She is disguised as a maiden who has run away from an abusive master. She does some very convincing (*eyeroll*) fake crying, and suddenly, there is a cockarice (a bad ass looking thing) attacking. Nimueh smirks (this is the default expression of anyone evil in the land of Camelot, folks) as Arthur fights the beast. Don't worry, he slays it.

After he kills it, Nimueh tells him she knows where the flower can be found and offers to lead him there. While in the cave, she casts another spell and the ledge Arthur is on collapses. She leaves him clinging to the edge of the cave, telling him it isn't his destiny to die at her hand. (Though I find fault with this logic....wouldn't this technically be dying at her hand? Sure, she didn't blast him with magic or anything but she is causing his death directly.)

Back in Camelot, an unconsious Merlin begins to mutter about Arthur and says magical words. Gauis quickly tells Gwen that it's just nonsense and sends her to go get some water to help keep the fever down. A magical orb of light appears in Merlin's palm and an identical one appears in the cave to lead Arthur to safety.

But then these giant spider things start in on Arthur. And I'll be honest, people, at this point, I'd be all "Sorry, Merlin, so done with this." I'd probably be plummeting to the bottom of the cavern in sheer horror.

Arthur manages to pick leaves from the flower and climbs out of the cave, following Merlin's light. When he returns to Camelot, though, he isn't able to get them to Gaius. He is arrested and thrown in the dungeon for disobeying Uther. Arthur begs his father to take the flower to Gaius, that he'll take whatever punishment Uther doles out, just save Merlin. The king, however, sees this as a teaching moment and crushes the flower and drops it outside the cells, saying Arthur can get a new servant when he's released
Arthur yells after him then tries to reach the flower through the bars of his cell.

Gwen pretends to be sent to bring food to Arthur in the dungeon. Arthur manages to give her the flower. She gets it to Gaius, who uses magic, though it's forbidden, to create the antidote. He quickly gives it to Merlin. Merlin stops breathing, and Gwen and Gaius assume he's dead and embrace in their grief. Merlin awakes and says "That's disgusting. You should be ashamed of yourself. You're old enough to be her grandfather." (I love sassy Merlin. LOL) Gwen, overcome with relief, kisses him.

As they watch the Mercian's leave, Uther tells Arthur he did the right thing (too little too late, IMO) and it is so freaking obvious that Uther is hiding something from Arthur. Something big.
Arthur goes to Gaius and Merlin's chambers to make sure Merlin is all right. 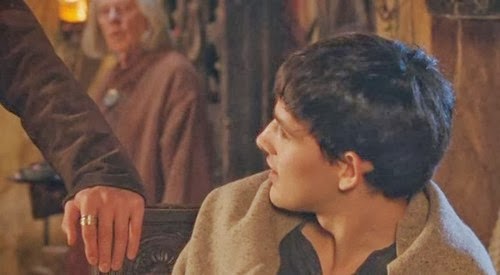 In this moment, I'm certain Merlin is debating whether to lean over and tongue Arthur's ring. I'm even more certain the only reason he didn't is because Gaius was right there. (total cock block that he is).

*ahem* Anyway, after Arthur leaves, Merlin asks why Nimueh would go through all the trouble of framing Bayard instead of just letting Arthur drink the poison and die. Gaius says Nimueh would have known Merlin would be forced to drink it. Merlin was the target, not Arthur. Gauis says, "It seems that someone else knows you're destined for great things."

If I’d written this episode, I would have changed… I know I mentioned it in last week's post, but I wouldn't have so much between Merlin and Gwen. I don't like it. They REALLY played up somethign happening between them. Mostly on Gwen's side. Like when he's checking out Nimueh at the feast, Gwen is pissed. Even going so far as to walk away and go stand by Gaius. Then the kiss she lays on him when she realizes he's recovered was not a platonic kiss.

There are many reasons I don't like the pairing and to discuss most of them would be major spoiler-y, so I'm just going to leave it at I don't like the romantic stuff between them. The close friendship...love it and would want to see that continue. I don't see the point of muddying it with romance.

The thing I loved and/or hated about this episode—I love how much people are willing to do to save Merlin, even though he is "only a servant." Arthur defies Uther and goes for the antidote, Gwen puts herself at risk to go down to dungeons to get the flower (and nearly gets caught), and Gaius uses magic (presumably for the first time since the ban on magic was started) to create the antidote. All three of them took great risks to save Merlin.

Something I never noticed about this episode before—I never noticed Gwen changed dresses during the episode. Yes, another Gwen dress thing. But, to be fair I'm on the look out for it now. She is wearing something new - a yellow gown for the banquet with their Mercian guests.

But you'll notice later in the episode, she changed back into her "everyday" dress. (See kissing pic above) So perhaps the yellow one is for special occasions?

Here is proof of some random head canon I’ve created—Arthur and Merlin have an amazing  connection that goes beyond friendship (or romance, if you think that way, and you know I doooooo!) They are really two halves and the whole magical orb thing shows this. They are who knows how far away from each other and Merlin is freaking unconscious, dying, and still doing everything he can to save Arthur. He somehow knows exactly what is happening with Arthur. They are so connected...because they were made for each other.

What would Bronwyn steal from Camelot in this episode—It's not an object this week or a decoration. Bron will take one dungeon, please, Arthur included. 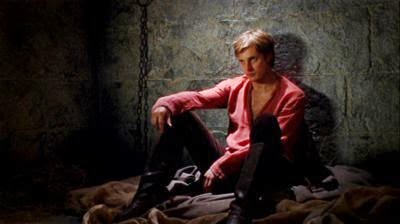 I know for a fact, Bron has had all manner of dirty thoughts about this scene. I hope against all hope that she writes a fanfic based on this. I NEED it. I think we all need it....badly. Get on it, Bron!

What made Jen lose her shit (in a good or bad way) in this episode? This was a hard one this week. So two small things when Gaius tells Uther it was Nimueh who poisoned the goblet - One, Uther really doesn't believe it at first. Which is just stupid. She brought on the Afanc last episode so why is he so shocked that she would strike again? And two, he also says something along the lines "That witch's face is not easily forgotten". Well, she WAS wearing a turban, Uther. 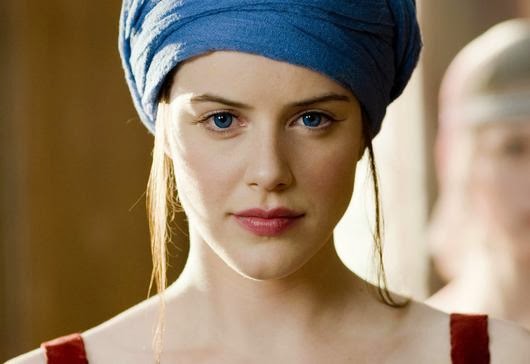 Perhaps it has powers, like Clark Kent's glasses, that make the wearer unrecognizable? I mean, perhaps she has changed her appearance through magic, but there's no indication of that. Every time we've seen her, it's with this face, so....who knows? Whatever, I like the idea of a magical turban, in any case. :-)

The Merlin Club Drinking Game is up! The list will grow as we work though the series, trust me, but I'll make sure to let you know! ;-) Also if you think something should be added, let me know in the comments.

And I will leave you with a delicious sight...

Until the next episode—Lancelot—which we will be watching Monday, 2/17, at 8pm EST. We’ll be on Twitter with the hashtag #MerlinClub