MERLIN CLUB: The Mark of Nimueh

MERLIN CLUB: THE MARK OF NIMUEH
Or The Freaking Dragon Ships It, So There!

RECAP – The episode begins with a sorceress, Nimueh, making a creature out of clay and places it in an egg thingy. She then brings the creature inside to life with a spell.

The she sends it to the river that supplies Cameot’s water. Seriously, it was like being in the drive-thru at the bank—whoosh, away it goes. Once in Camelot, the egg surfaces in the city’s underground water supply (reservoir? Not sure what it’s called…  Added: Have been informed it’s a cistern. See, Merlin is freaking educational!)

Gaius and Merlin check out a dead man, who has died from unknown causes. 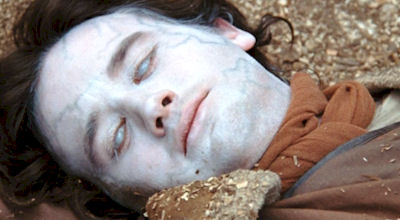 He looks pretty gruesome so they cover him up and whisk him away to Gaius’s chambers. On the way, they see Gwen, who is taking flowers to Morgana and she gives Merlin one. Once they in Gaius’s chambers, Arthur comes in for Merlin and tells Gaius to go to the king.

Turns out one of the royal court’s servants has died in the same mysterious way as the man Merlin and Gaius had been examining. Uther demands to know what the cause is. Gaius insists he needs more time (for the scientific process, folks. It’s aaaaaall about the science with Gauis…except when it’s not. :-/) but, after some pressure from our totally unbiased and completely non-prejudiced king, Gaius admits that it’s mostly likely sorcery. Uther orders Arthur to search every house in town and Merlin is to work with Gaius until they get some solid answers.

Convo between Merlin and Gaius—Merlin can’t get why anyone would want to use magic for harm. The older man explains that, while magic is neither good nor evil, it is like any other power which can corrupt. They get to work but are interrupted by Arthur and some guards who search the physician’s quarters, including Merlin’s room. Merlin panics because of his book of magic—he is not being very careful with it. And then he uses magic to hide the book, which was out in plain sight. (Oh, Merlin…)

Arthur, finding nothing, leaves. Merlin gets upset that Gaius won’t allow him to use magic to help the victims. Gaius is convinced they only need to find the source of the plague before they do anything, and assures Merlin his time to be a great sorcerer is coming.

When Arthur fails to find any evidence of magic, Uther orders him to widen the search to surrounding areas, set a curfew, and isolate the part of town where most of the dead had lived. Merlin and Gauis have figured out that the sickness is not spread through physical contact since a courtier who'd died wouldn’t have been around the other victims. They deduce that the only similarity in all the sick is the water they drank came from the same source.

Gwen’s father, Tom, contracts the disease, and she is devastated when Gaius tells her there is no cure. That night, Merlin uses his magic despite Gaius warnings to sneak  to Gwen’s home and cure Tom by putting a poultice under his pillow and incanting a spell.

Gaius informs the king that Camelot’s water supply is contaminated. When Merlin sees Gwen, he tries to act surprised that her father is well again but Gwen suspects something and questions him, but then laughs when he jokes that he’s psychic. Arthur sees Tom in town and questions him about his recovery. Since Gwen was the only person Tom says was with him, Arthur is forced to act. He searched their home and finds the poultice. He arrests Gwen and brings her to the king. Uther demands she lifts the curse. But, of course, she can’t. Uther, who assumes she is lying, sentences her to death.

Arthur and Morgana argue for her—Morgana saying there is no way Gwen used magic, and Arthur saying, even is she did, it was to save her father and clearly without evil intent. Arthur states that the punishment should fit the crime. He means, of course, that Gwen shouldn’t be executed but Uther twists it around and claims that Gwen played with fire so she shall die by fire.

Merlin visits Gwen in the dungeon and promises that he won’t let her die. He bursts into the king’s council and confesses to sorcery…. *gasps and clutches heart*

Arthur convinces Uther Merlin confessed because he’s in love with Gwen. At which point, Uther laughs (because he’s just that kind of guy *eyeroll* ) and dismisses Merlin without punishment.

Gaius says only a powerful sorcerer could create such a thing. Merlin goes to see The Great Dragon. The dragon tells him to use the elements available. Then he says that Merlin and Arthur are like two sides of the same coin, and their paths lie together.

With people still dying, Uther moves Gwen’s execution forward. With Gaius’s help, Merlin figures out that since the Afanc is created of two of the four basic elements—water and earth—using the other two—air and fire—may destroy it. Morgana rushes in to let them know that Gwen is to be executed that evening and helps convince Arthur to go with them below and face the Afanc . After a bit, Arthur corners it and, with a bit of wind conjured by Merlin, kills the creature with his torch. 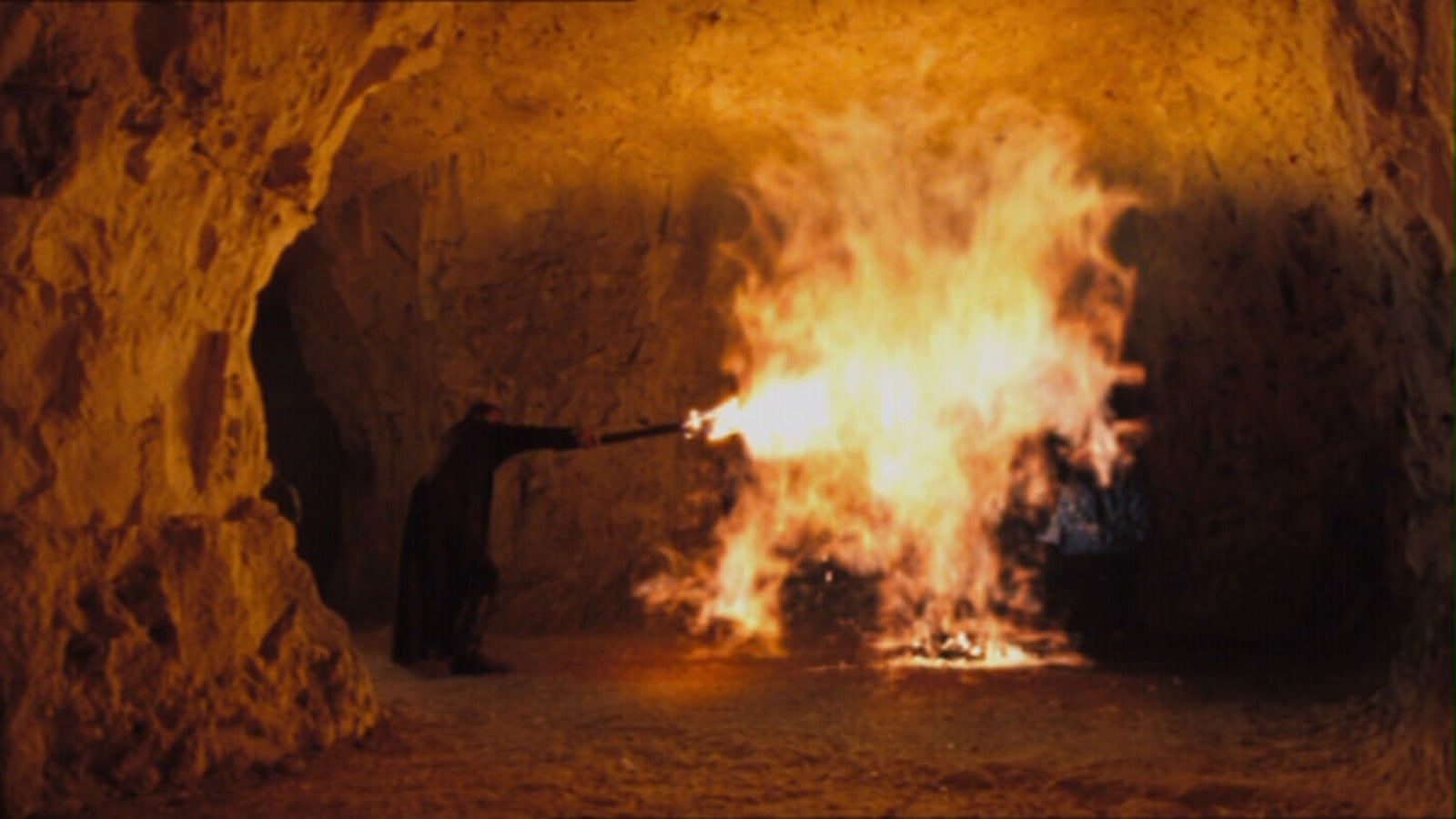 Nimueh watches this, scrying in her pool.

Later, Gaius beings Uther the remains of the egg that bore the Afanc—it bears the mark of Nimueh Uther is quite upset and asks “Will I never be rid of her?” Gwen is released from prison and Morgana tells Merlin his secret is safe with her. At first he thinks she means his magic and is happy to have someone to confide it, but he realizes she believes he’s in love with Gwen, saying Gwen is a “lucky woman.”

In her cave, Nimueh vows that Merlin will pay for his interference.

If I’d written this episode, I would have changed… Honestly I can’t think of anything to change. I’ve been wracking my brain for quite a while and came back to this one. I'm at a loss here. But, never fear, I’ll make up for this in later episodes. Trust me.

The thing I loved and/or hated about this episode—Loved Arthur’s quick defense of Merlin when Merlin confesses. Also, that he defended Gwen—even if she did use magic, he could understand why.

Didn’t really hate anything, but I don’t like the hinted romance between Gwen and Merlin. Not the assumptions made by Arthur and Morgan, but the flirting between Gwen and Merlin etc. It’s subtle but it’s there. Makes you wonder if, since the creators of the show made prince and sorcerer contemporaries, are they going to make them romantic rivals as well?  I don’t like it. And not just because I think the boys should hook up, I swear.

Something I never noticed about this episode before—It’s not that I didn’t NOTICE the conversation when I watched before, but when Gaius and Merlin are talking about what the victims have in common, holy moly, Gaius is like Gawd, Merlin, you’re so stupid. (“sometimes I wonder if your magical talents were given to the right person.” Ouch, Gauis!) LOL It came up in our twitter convo while watching and it surprised me because I hadn’t thought about it before.

Favorite costume—It goes to Morgana this week. No surprise, really. Her costumes are fantastic. I love the dress AND the cape. Here is proof of some random head canon I’ve created—OMG, guys, guys, GUUUUUUYS!!! The dragon totally ships Merthur. C’mon, two sides of the same coin, your paths lie together…that’s soul mate talk…that  is NOT platonic. You cannot convince me it is. ;-)

What would Bronwyn steal from Camelot in this episode—The screen in Morgana’s rooms.

What made Jen lose her shit (in a good or bad way) in this episode? Two things. The big one? That Merlin knew the town was being searched yet just left the poultice behind. Would it have been that difficult to remove or destroy the evidence? Think, Merlin, THINK!

The second? When Merlin confesses and Arthur successfully convinces everyone he’s lying because he’s in love with Gwen, Uther freaking laughs and says something like “Perhaps she’s enchanted you.” Nice, Uther. He’s chuckling it up and all, “Your love’s going to burn tonight; sucks to be you.” Urgh.

RANDOM THOUGHTS—The Great Gwen Wardrobe Watch Continues. She is still in the same gown. Although, it looks like that may change next week from what I saw of the previews…stay tuned.

Also, I’ll be posting a list of the things that could be used as a drinking game in this series. Will post that next week. Though some of the items…if you play, you may end up in the ER!

Until the next episode—The Poisoned Chalice—which we will be watching Monday, 2/10, at 8pm EST. We’ll be on Twitter with the hashtag #MerlinClub
Posted by Jess Jarman at 8:00 AM