MERLIN CLUB: LANCELOT
Or The One That Confims Jess' Collarbone Kink

RECAP - Merlin is off picking mushrooms in the forest (and is NOT wearing his neckerchief!) and is attacked by a griffin. The beast is about to get him, but a handsome young man comes to the rescue, swinging a sword. The sword breaks and doesn't harm the griffin. Merlin and the man run away and the griffin, after chasing a bit, flies away. The stranger, who was hurt during the fight, introduces himself as Lancelot.
Later, Uther and Arthur search the forest for the creature who has killed people from a nearby billage. Uther orders Arthur to prepare Camelot’s knights as it seems the griffon is headed their way.

Lancelot is all better and tells Merlin his lifelong dream of being a knight of Camelot. Merlin says he’ll put in a good word with Arthur, but then he learns that only those of noble can become knights. Lancelot is quite disappointed by this as his dream is crushed. (Awwww).

Merlin, undeterred by pesky rules, especially those he deems unfair, uses magic to forge a seal of nobility for Lancelot. The other man is reluctant to use it, but Merlin convinces him this is the only way he can prove his worth. He takes Lancelot to Gwen to fit him for chainmail. While she’s measuring him, there are many heated looks and It’s obvious they are into each other.
Gaius, of course, gets on Merlin’s case for creating the seal for Lancelot, but Merlin is steadfast in the defense of his actions – the rules are unfair and he has to repay the man who saved his life.

The griffin moves closer to Camelot and Uther tells Arthur to ready the knights. As a result, lancelot’s test of knighthood is moved forward. He has to last one minute in a fight with Arthur. After a bit, Lancelot fakes defeat and attacks Arthur when the prince moves to to remove his ribbon thingies.

Lancelot is knighted, but Uther is suspicious and orders Geoffrey of Monmouth (the court genealogist and the dude who looks like he’s from the Guess Who game…) to examine the seal.


During the evening’s celebration (is it in celebration of Lancelot becoming a knight..not really sure?), Merlin asks Gwen who she would choose to fall in love with.

Gwen says she will never have to make the decision. Meanwhile, the men in question are talking about women. Arthur asks Lancelot if he finds Morgana beautiful (though not by name). Lancelot, talking about Gwen, says yes. 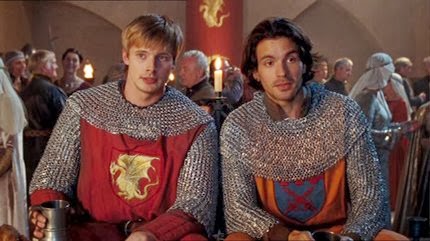 The next morning, guards come into Gaius’ chambers and arrest Lancelot. Geoffrey has ruled the seal a forgery , and Uther is appalled. He seriously has a real hard on for the whole "First Code of Camelot", that only a nobleman can be a knight thing. Lancelot is thrown in the dungeons. Arthur argues that Lancelot has proven himself, but Uther says he has betrayed their trust and not worthy.

Gaius, having done the research he is famous for, has discovered the creature is a griffin. Arth and the knights battle it and it destroys Arthur’s weapons but retreats when Arthur uses a torch. Gaius tells the king that it is a creature of magic and can only be defeated by magic. Uther says oh no, they can lure it and kill it that evening. Because why listen to Gauis, right? Uther obviously knows best.
Gaius tells Merlin he has to use magic or Arthur will be killed. Merlin works on learning the hard to pronounce spell.

Arthur releases Lancelot – saying he wishes he could make Lancelot a knight because he fights like one. Instead though he orders him to leave Camelot before the king finds out. Lancelot goes to Gwen and asks for armor and weapons so he can help fight the griffin anyway. She begs him not to go. Merlin learns of Lancelot’s plans and follows quickly.

The knights are in a clearing and are slaughtered by the griffin. (Thanks, Uther) Arthur is wounded and down for the count (DRINK!) when Lancelot goes after the beast. Merlin uses the spell and Lancelot’s spear begins to glow and he is able to kill the griffin. 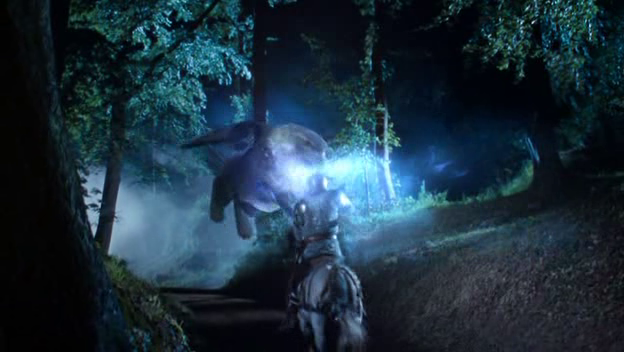 Merlin runs away before Arthur comes to so when the prince wakes he believes it was Lancelot alone who killed the creature.

Uther is majorly pissed off that Arthur released Lancelot. Seriously, Uther? You sent your knights to their deaths because you wouldn’t listen and you can’t thank the man who saved your son from the same fate?
Arthur argues that Lancelot saved him and fought with honor. That he should be a knight of Camelot. But Uther refuses. In the hall, waiting to hear his fate, Lancelot tells Merlin he knows that it was Merlin who made it possible to defeat the griffin – repeating the spell. He promises to keep it secret. Then he goes to the king and prince and says he cannot stay. He’s come between father and son and he can’t stand that. He has decided to leave Camelot. Gwen watches him from Morgana’s chambers, lovesick and wistful. Merlin hopes to see Lancelot return someday.

If I’d written this episode, I would have changed… This was the hardest one for me. I can't think of anything I'd change really. The things I didn't like (Uther--see below) I wouldn't necessarily change. I guess if I had to pick something it was that Lancelot was just too freaking perfect. The worst thing he did was lie about his lineage, and that was after Merlin convinced him. And I know it's only one episode, so I don't know that they could have done more with him, but at this point he's a pretty one-dimensional character. A very pleasing-to-look-at one, but one-dimensional. I'd like to see more depth, and I guess we'll have to wait and see if we get that later in the series...

The thing I loved about this episode – I'll admit I'm a sucker for Arthur fighting. Bradley James, you do it so well and look so pretty while you're doing it. Add Santiago Cabrera (Lancelot) to the equation? HEAVEN.... 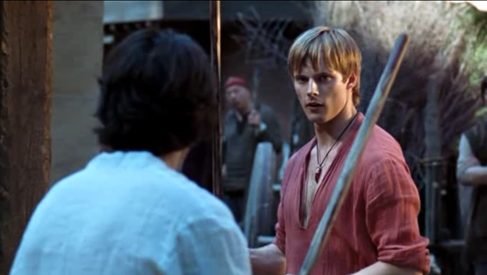 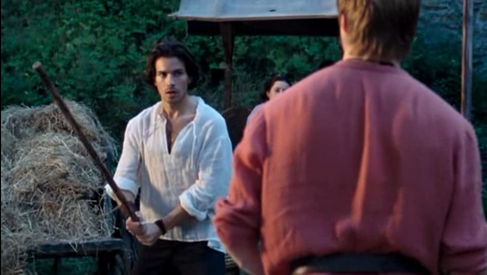 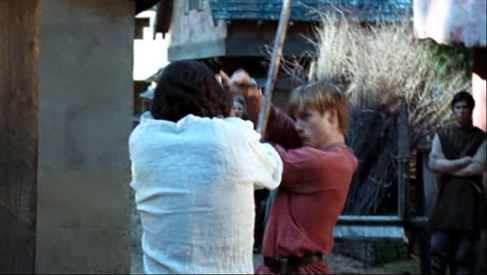 The thing I hated about this episode – It drives me nuts when Uther doesn't listen. Yeah, I know it's not going to change and it'll keep driving me nuts. But he's all magic this and magic that, but then when Gaius says, this is magic, he's all naaaaaaaah. Let me send my knights and son out there because I refuse to listen and admit someone knows more than me. He pisses me off so much that right now, the Ryan Stiles flipping him off isn't even enough. So courtesy of my awesome kid.... Hey Uther....
Something I never noticed about this episode before – So when Lancelot presents his fake seal to Arthur, Arthur hits him and knocks him down and says he has slow reflexes, that if it were battle he'd be dead, and to come back when he's ready. When Lancelot tells him he is ready, Arthur considers then sends him to clean out the stables. The reaction from Merlin and Gwen who are watching this whole time: 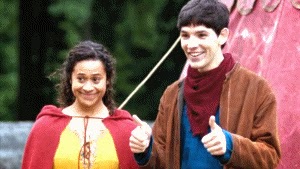 Now, at first, I was like, look how happy they are for their friend. (And the pic doesn't do justice to just how joyful Merlin looks) THEN when watching this time, I realized...he's just beyond thrilled that someone else has to muck out the stables!!!!

Favorite costume – Merlin spent a good portion of this episode sans neckerchief. You will not hear me complaining. Hello, collarbones.
Here is proof of some random head canon I’ve created – It's no secret that I'm firmly in the Merthur camp. They are made for each other. HOWEVER, if they were to ever consider adding a third to spice things up... Lancelot is one of the oh, three people I would approve of in that situation. (Because clearly they would need my approval. *snort*)

What would Bronwyn steal from Camelot in this episode?
The mirror in Morgana's chambers. It's behind Morgana when she she's talking to Gwen as Gwen gazes out at the leaving Lancelot. The pic isn't from this episode (because heaven forbid that I can actually find what I'm looking for!) but it's the same mirror. 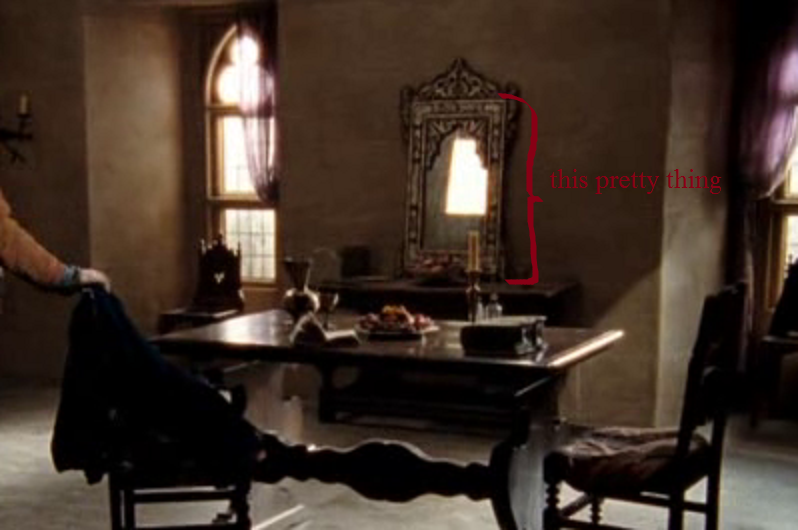 What made Jen lose her shit (in a good or bad way) in this episode?
I'm going to go with Arthur drooling over and making googly eyes at Morgana at the celebration.

RANDOM THOUGHTS -
I got nothing here. But I'll leave this here for all you Lancelot lovers. Just look at that smile... (And I'm not indifferent, by any means, I just lurve another.)

Until the next episode - A Remedy to Cure All Ills - which we'll be watching Monday, 2/24, at 8pm EST. We'll be on Twitter with the hashtag #MerlinClub